“[2012] witnessed a significant decoupling of market volatility and economic uncertainty. Implied volatilities in equities, foreign exchange, fixed income, credit and commodities all reached post-Lehman lows at the end of October 2012.” 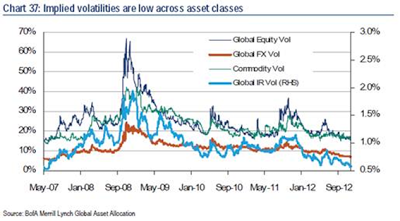 “Markets are particularly uncertain about what type of economic policies the leading countries will end up implementing to support growth. This perception of uncertainty is captured nicely by the indices of economic policy uncertainty recently elaborated by Baker, Bloom and Davis for the US and Europe. These indices are constructed by aggregating over three components. The first component is news based that quantifies newspaper coverage of policy-related economic uncertainty. The second is a tax code expiration component that quantifies federal tax code provisions that, as a matter or current law, are scheduled to expire at specific current dates. The third component captures forecast disagreement among economic forecasters. Not surprisingly, the indices show that policy uncertainty is still very high. In fact, current readings are close to those registered during the unfolding of the Lehman crisis.”

“Implied volatility trended lower across asset classes because realized volatility had declined in the first place. If realized volatility is moving down, implied volatility will go down as market
participants exploit the excess risk premium (measured as implied minus realized volatility) until driving it to equilibrium levels. In practice, when realized volatility collapses, scalpers sell gamma to profit from the difference between realized and implied volatility.”
“The most important drivers of the generalized steady fall in market volatility across asset classes have been the waves of significant conditional liquidity introduced by G7 central banks. Those are not random, but an endogenous reaction of policymakers to a worsening of economic and financial conditions in the leading countries. In the US, the Fed implemented the so called Bernanke puts, or very accommodative monetary policy through QE and forward guidance. In the Euro area, the European Central Bank implemented the Draghi puts, liquidity backstops through Long-Term Refinancing Operations and conditional sovereign debt purchases through Outright Monetary Transactions.
In addition… more and more central banks in developed and emerging economies have decided to intervene unilaterally to avoid what they considered an excessive appreciation of their respective currencies.”
“The reshaping of the whole distribution is what lies beneath the link between the volatility (and higher moments) and the drift of the distribution of asset prices. When the market (leveraged participants) is heavily underweight risk (overweight cash and bonds and underweight risky assets), as was the case when all the marginal liquidity injections were announced, the removal of tail risks tilts the risk-reward profile in favour of risky assets, inducing some asset reallocation. Asset prices change until the new allocation is an equilibrium one. This is why we observe a negative correlation between movements in implied volatilities and the underlying assets.
Positioning is one of the most obvious measures of uncertainty from the market perspective, and more specifically the bias toward cash and safe bonds in the portfolios of leveraged and benchmarked investors. This self insurance reaction of investors, coupled with the asymmetric behavior of volatility discussed above, help to explain why low volatility can coexist with high uncertainty. With leverage low because investors are underweight risk, demand for protection is low.
TAGS
asset management Asset Purchase Program banks bond returns bond yields bubbles capital regulation central counterparty clearing China collateral commodities credit returns default ECB economic data EM equity returns euro area crisis Fed financial crisis FX FX interventions FX returns government debt government deficits herding inflation information insurances Japan leverage liquidity machine learning market turmoil price factors regulation risk management shadow banking statistical methods term structure trend following variance risk premium VIX volatility ZLB

The idea of uncovered equity parity