The IMF Fiscal Monitor provides the usual insightful global summary of public finance trends. It reveals significant progress in the reduction of structural deficits in the developed world, at the price of drastic fiscal tightening that will aggravate further this year. However, public debt ratios have yet to peak and their current levels bode ill for future growth and government shock-absorption capabilities. A major implicit concern is Japan, where the structural deficit has not been reduced and both net and gross debt have been soaring.

The [analytically more important] cyclically-adjusted deficit-to-GDP ratio in the advanced economies is likewise expected to decline substantially to 3.6% in 2013, from 4.7% in 2012, and 6.2% in 2009. This would imply that discretionary fiscal tightening in the developed world is accelerating this year to 1.1% of GDP from 0.8% in 2012. A good part of this aggravated tightening would come from the U.S. As the IMF writes: “The United States, despite having averted the “fiscal cliff,” is set for a decline of 1.75% of GDP in its cyclically adjusted primary deficit in 2013, almost 0.5% of GDP more than in 2012, largely reflecting the automatic spending cuts (the so-called sequester) that went into effect on March 1”. Yet also the euro area would tighten fiscal policy again by 1.1% of GDP this year, with France, Italy, and Spain being major contributors.

“The largest [negative] deviation from previously projected 2013 outturns is expected in Japan, where the authorities have introduced a new stimulus package amounting to 1.5% of GDP over 2013–14, including shovel-ready investment projects and contributing to an increase of about 1% of GDP in the 2013 deficit forecast relative to earlier projections. Stimulus spending and increasing social security outlays are expected to keep the cyclically adjusted deficit above 9% of GDP in 2013, more than twice the advanced economy average. This will mark the fifth consecutive year in which the cyclically adjusted deficit has increased”

The average general government deficit in the emerging world is expected to remain roughly unchanged at a modest 2.2% of GDP in headline terms. The negative outlier remains India, with a fiscal gap of 8.3% of GDP. 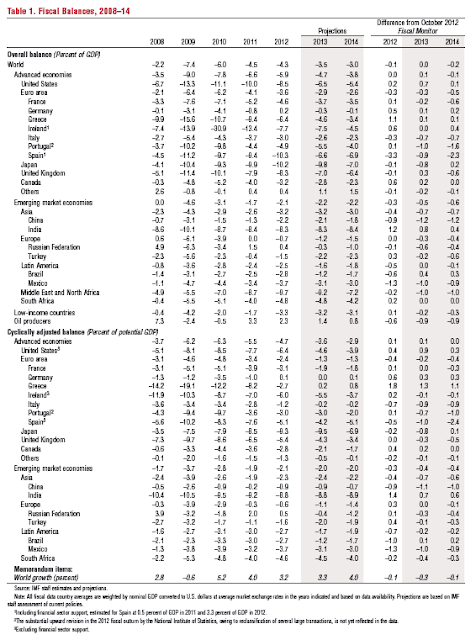 Despite steady consolidation in advanced economies over 2011–13, the average additional adjustment required to meet primary surplus benchmarks by 2020 is still substantial, at 5% of GDP. 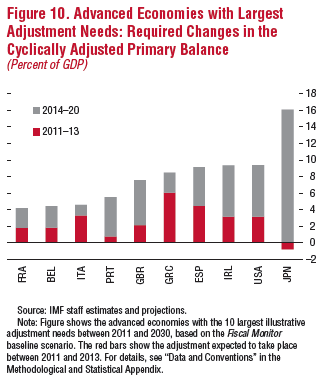 General government debt ratios
According to the IMF, “Despite the brisk pace of fiscal consolidation in advanced economies as a group, debt ratios are projected to continue to increase in 2013, with the average ratio peaking only in 2014”. The advanced economies’ gross debt-to-GDP-ratio is expected to increase over 110%, while the net debt ratio is expected to exceed 78% in 2013, from 77% in 2012, and 52% back in 2008.

The gross debt ratio in the emerging world has remained low and contained at is expected to slip to 34% of GDP in 2013, not far from the 33.5% level where it stood back in 2008. 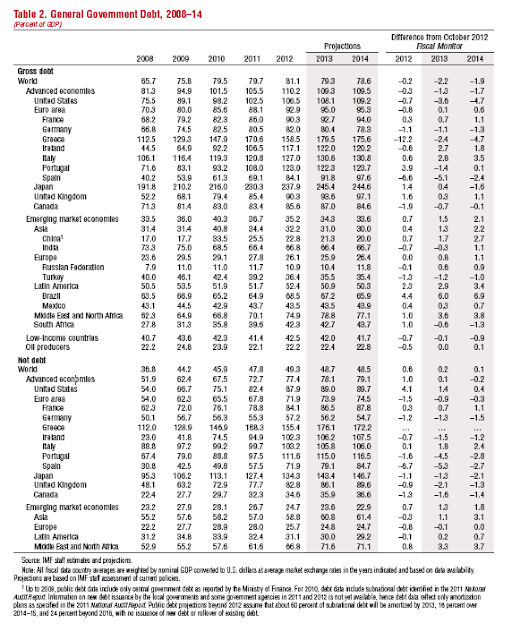 “High debt—even if stable—retards potential growth, constrains the scope for future discretionary policy, and leaves economies exposed to further market shocks…A large body of research, summarized in previous issues of the Fiscal Monitor, concludes that high public debt leads to higher interest rates and slower growth. Most studies find that high debt levels. (above 80–90 percent of GDP) have a negative effect on growth (some 0.15–0.20% per 10%-points of GDP). High debt also makes public finances more vulnerable to future shocks, because it constrains governments’ ability to engage in countercyclical policies and because the larger the initial debt ratio, the bigger the increase in the primary surplus required to stabilize that ratio after an adverse shock to growth or interest rates. Indeed, when debt is high, there is a risk of falling into a bad equilibrium caused by self-fulfilling expectations (high debt is unsustainable because markets believe it is so and set interest rates accordingly).

Fiscal policies“The key elements of the required policy package are well known: foremost among them is setting out—and implementing—a clear and credible plan to bring debt ratios down over the medium term. The continued absence of such plans in Japan and the United States remains a significant concern, particularly given the introduction of new short-term stimulus in Japan (even though temporary) and insufficient progress on measures to restore medium-term fiscal sustainability, including entitlement reform, in the United States.”

“To buoy the credibility of their adjustment efforts, a growing number of advanced and emerging market economies have improved their fiscal institutions over the past year. For example, Ireland and Portugal have begun to strengthen their medium-term budget frameworks by introducing enforceable expenditure ceilings, Sweden has established a parliamentary committee to evaluate the budget process, and Peru has set up an expert committee to propose reforms that would strengthen the macro-fiscal framework.”

The power of R for trading (part 2)