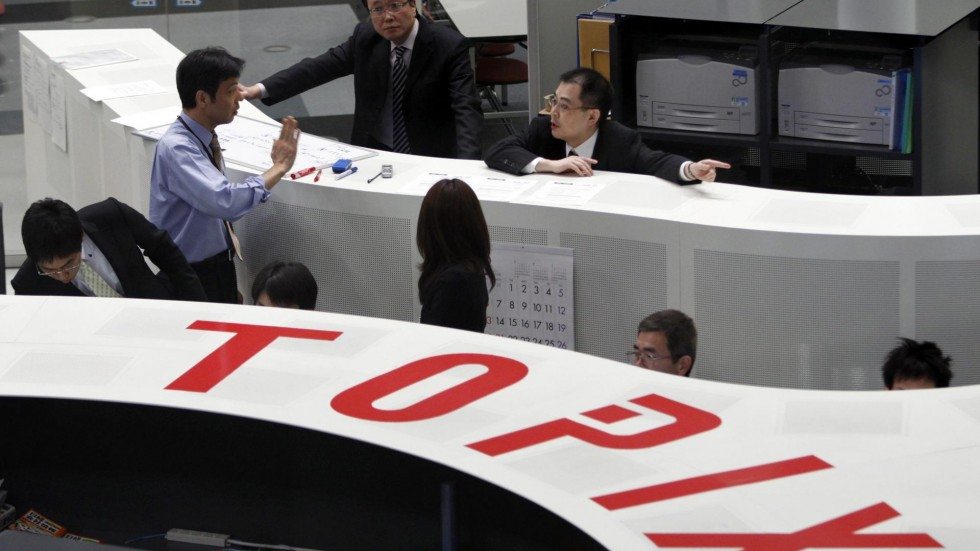 Low government bond yields (0.76% for 10-year maturity at present) allow Japan to preserve debt sustainability despite a gross debt-to-GDP ratio of over 220%. However, a working paper published (a while ago) by Takeo Hoshi and Takatoshi Ito argues that a tipping point may be ahead. Thus far yields have been kept low thanks to large domestic savings with a strong home bias and low returns in other assets. Under current trends, however, the nominal public debt stock will have reached the overall level of private sector financial assets by 2016. Meanwhile, attempts to reflate assets and stimulate the economy will raise the opportunity costs of holding government debt.

Why have Japanes yields been so low?
The paper identifies three conditions that have supported the high indebtedness without a rising interest rate of Japan so far. Those are (1) a large amount of domestic savings with an extreme home bias, (2) a stagnant economy that depresses the rate of return in every sector, and (3) expectations of future fiscal consolidation.
“The largest share [of Japanes Government Bonds] (39%) is owned by banks, including the Post Bank. The insurance companies hold about 20% of the total. The other private-sector financial institutions own about 10%. The government social security fund (Government Pension Insurance Fund or GPIF) also owns about 10%. The Bank of Japan holds about 8%. Additional 5% is held by the households directly and about 3% is held by other domestic investors. Thus, more than 95% of JGBs are owned by domestic residents. This implies that the Japanese government bond rate was determined solely by domestic factors and free from the volatility of external factors, such as long term interest rates of other major countries or foreigners’ sentiment. Sudden capital inflows and outflows or exchange rate concerns (either appreciation or depreciation) do not spill over to the JGB market.
[In principle, domestic] savings could chase higher returns and flow abroad, but this has not happened for Japan. We observe strong home bias in Japanese institutional and retail investors. The proportion of the yen-denominated domestic assets for Japan is extremely high, compared to investors in other advanced countries.”
Why is there risk of a tipping point?
“There is an absolute saturation point beyond which the debt cannot be absorbed without drastically changing yields. It is when the total amount of government debt reaches…the sum of all the private sector financial assets. Foreign investors have already shied away from the JGB market, as 95% of JGBs are held domestically. When the domestic financial assets are all Japanese government debt, it is the absolute dead end. If the dead end is close enough to be visible, even Japanese investors will try avoiding accumulating more JGBs. Economic recovery may raise the interest rates and make it harder for the government to roll over the debt.
With rapid aging in Japan, household in aggregate will start spending down financial assets rather than further accumulating them. The total household financial assets peaked at JPY 1,566 trn yen in March 2007, and have already declined to JPY1,476 trn by March 2011. (The net financial assets, after deducting mortgages and other liabilities, are about JPY1,110 trn.) If this pace of decline continues, the household financial assets will be about JPY1,340 trn by 2016. The outstanding amount of Japanese government bonds (JGB) in March 2011 was JPY943 trn, up from 674 trn in 2007. If the pace of increase continues in the future, the JGB outstanding will be 1,350 trn, for the first time exceeding the household assets, in 2016. So, according to this simple calculation, Japan would be insolvent as a nation in 2016.”
What could trigger a crisis?
Savings dynamics: “Almost all JGBs are held by the Japanese residents. If the growth of the private savings decelerates, and the government debt continues to increase, the amount of the government debt may eventually exceed the amount of private savings. At that point, even mobilizing all the private sector financial assets to hold the JGBs, leaving nothing for the corporate sector credit, would not be sufficient. Thus, it is unlikely that the economy ever reaches that point. As soon as the market sees that the extrapolation of the current course eventually would lead to such extreme situation, the government will have trouble selling new JGBs.”
Return dynamics: “Financial institutions [could] find alternative and more lucrative ways to invest the funds. In general, when the economic environment changes to increase the returns from alternatives to the JGBs, the interest rate on JGBs may start to increase. If this suddenly happens, this can trigger a crisis. Increases in the rate of returns may be caused by favorable changes in the economic growth prospect. The end of deflation and the zero interest rate policy would also lead to higher interest rates.”
Fiscal dynamics: “To the extent that the current low JGB yield is backed by the public’s expectation that the Japanese government will restore fiscal balance eventually, any event that disturbs the belief can precipitates a crisis.”
TAGS
asset management Asset Purchase Program banks bond returns bond yields bubbles capital regulation central counterparty clearing China collateral commodities credit returns default ECB economic data EM equity returns euro area crisis Fed financial crisis FX FX interventions FX returns government debt government deficits herding inflation information insurances Japan leverage liquidity machine learning market turmoil price factors regulation risk management shadow banking statistical methods term structure trend following variance risk premium VIX volatility ZLB