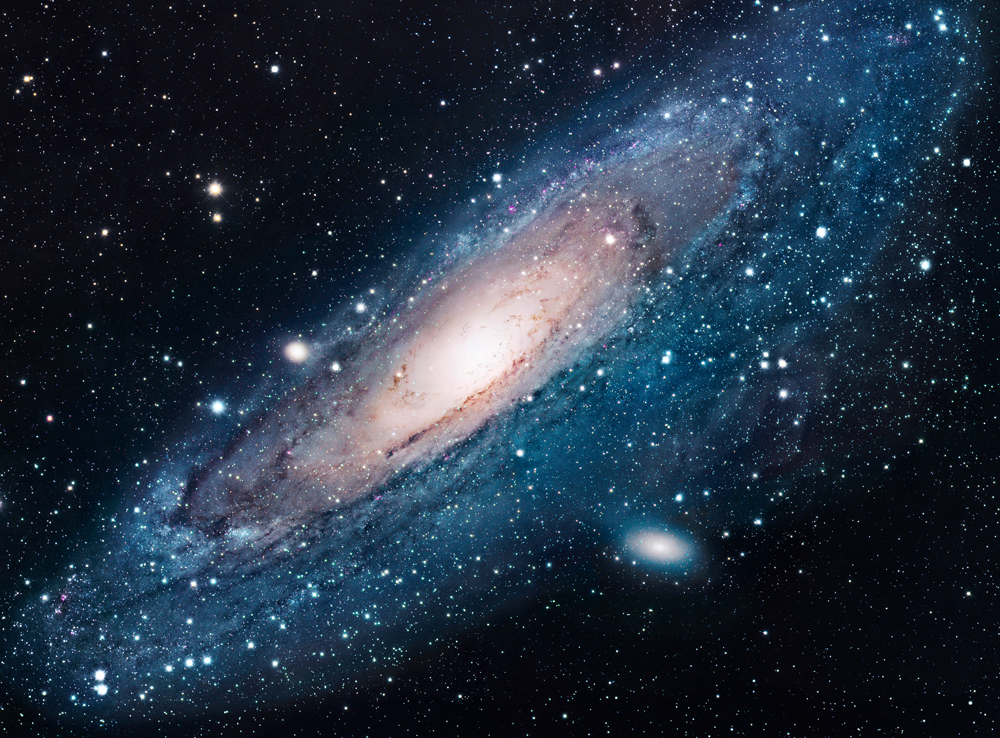 Since the late 1990s, the negative price correlation of equity and high-grade bonds has reduced the volatility of balanced portfolios and boosted Sharpe ratios of leveraged “long-long” equity-bond strategies. However, this correlation is not structurally stable. Over the past 150 years, equity-bond correlation has changed repeatedly. A structural economic model helps to explain and predict these changes. The key factor is the dominant macro policy. In an active monetary policy regime, where central bank rates respond disproportionately to inflation changes, the influence of technology (supply) shocks dominates markets and the correlation turns positive. In a fiscal policy regime, where governments use debt financing to manage the economy, the influence of investment (financial) shocks dominates and the correlation turns negative. In a world with low inflation and real interest rates, the fiscal regime is typically more prevalent.

The below post is based mainly on quotes from the above paper. Other sources that have been used are linked after the respective quotes.

This post ties in with this site’s summary on macro trends.

The importance of bond-equity correlation

“Effective diversification by managers is reliant on the returns of ‘broad’ asset classes, primarily equities and bonds, moving independently (or even better, in opposing directions)…Negative correlation between equities and bonds…has allowed managers to use fixed-income assets…as protection in periods of high market stress. It has largely been the mainstay of asset managers’ playbooks for decades.” [CFM]

“The volatility of a balanced…equities and fixed income…portfolio increases dramatically if the correlation between these primary assets moves from negative to positive, particularly for those strategies that use leverage to augment returns from fixed income (see graph below). Sharpe ratios deteriorate, implying that the potential rewards no longer match the risks taken, and to maintain acceptable levels of portfolio volatility, investors are forced to de-lever, or find alternative ways to reduce risk.” [Sibley, 2020] 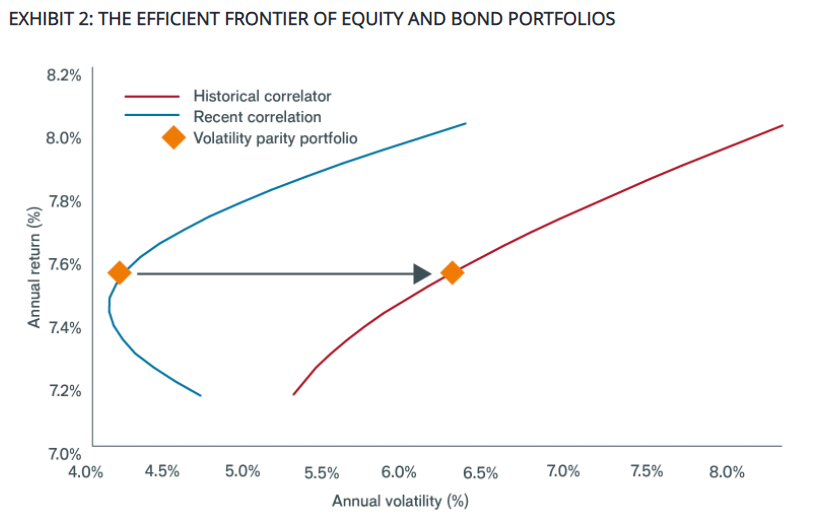 “Empirical studies have documented the time-varying correlation between returns on the market portfolio of stocks and those on long-term (5-10 years) nominal Treasury bonds. This correlation was positive before 2000 but turned negative afterwards (see chart below). At the same time, the correlation between consumption growth and inflation also changed sign around 2000 from negative to positive.” 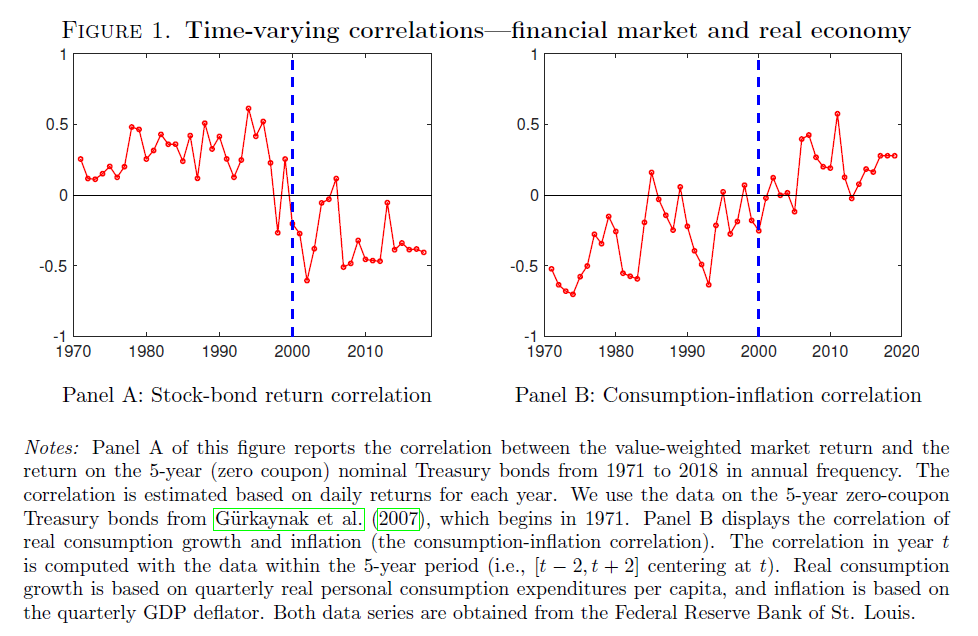 “Using data going back to the mid-19th century, it is clear that the correlation between equities and bonds has been mostly positive, making the recent, and consistent stretch of negative correlation the anomaly, rather than the rule.” [CFM] 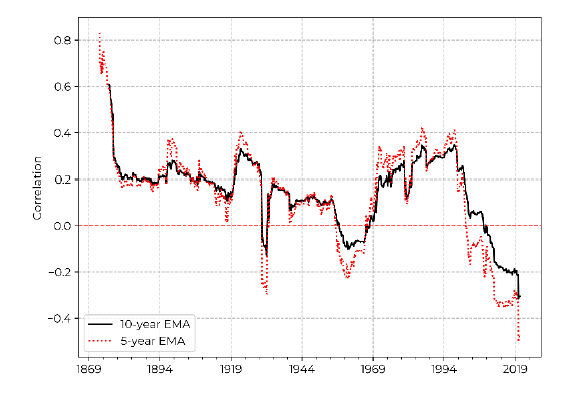 “The correlation between the returns of government bonds and equities is one of the most important metrics in asset allocation…We have shown, however, that this critical relationship depends on whether shocks occur in the equity or bond market. When shocks emanate from the equity market, the correlation is typically negative, but shocks to the bond market correspond to a positive relationship between stock and bond returns.” [PIMCO]

“We focus on the economic mechanism with a mix of both active fiscal and active monetary policy that endogenously generates the time-varying correlations of both macroeconomic and financial variables.
We show that the mix of the monetary and fiscal regimes is essential to account for the [bond-equity and inflation-consumption] correlation patterns and risk premiums. Under the monetary regime, the effect of the technology shock on these two correlations dominates that of the investment shock; while the opposite is true under the fiscal regime, because the effect of the technology shock is largely muted by passive monetary policy. Narrative accounts of U.S. monetary-fiscal policy history as well as previous empirical studies indicate that the post-2000 period is consistent with the fiscal regime, while the 1971-2000 period is consistent with the monetary regime.”

“Consistent with the empirical observation, risk premiums of long-term Treasury bonds remain positive under the fiscal regime in the model while the stock-bond correlation is negative. The key to this result is that the dynamics of the pricing kernel, thus risk premiums, in the model are driven mainly by the technology shock, regardless of the policy regime. Since stock and bond risk premiums are both positive under the technology shock, positive bond risk premium and negative stock-bond correlation coexist in the fiscal regime.”

“We calibrate the model to match moments of key macroeconomic and financial variables and show that technology and investment shocks, not monetary and fiscal policy shocks, are the critical structural shocks in yielding the following key results:

“All our results hold when the nominal interest rate is at the zero lower bound, which is an extreme case of the fiscal regime.”

Note: this model is consistent with other theoretical research that suggests that

A method for de-trending asset prices