Large-scale asset purchases have become a plausible policy option for the European Central Bank. A BNP research report suggests that an initial meaningful program could require purchases worth 3-5% of euro area GDP. A program of that size would have to focus on the sovereign bond market, with the acquisition of private-sector assets possibly featuring as a complement.

The below are excerpts from the report. Emphasis and cursive text has been added.

The option of large-scale asset purchases

“The signals from a range of ECB officials have been clear when it comes to the principle of asset purchases: they are possible, and have become more probable, in the context of persistently low inflation…ECB President Mario Draghi has stated on a number of occasions that the ECB is ready to use ‘all the [policy] instruments that are allowed by the Treaty’. Indeed, he [responded] in the affirmative to a specific question about whether the ECB could buy sovereign debt in the future. In short, he said it had been done before and was not against the Treaty.”

“While the viability of OMT [outright monetary purchases] is uncertain following the German Constitutional Court’s announcement [which referred questions regarding the legality of the OMT with the European Court of Justice], the latter does not rule out ECB asset purchases if they are made in order to avoid the ECB failing to meet its price stability mandate. If, as appears to be the case, the ECB is keen to distinguish between the OMT framework and a future purchase programme linked to adherence to its mandate, it could do so by choosing a title for the facility specifically related to its purpose… such as the Price Stability Facility. 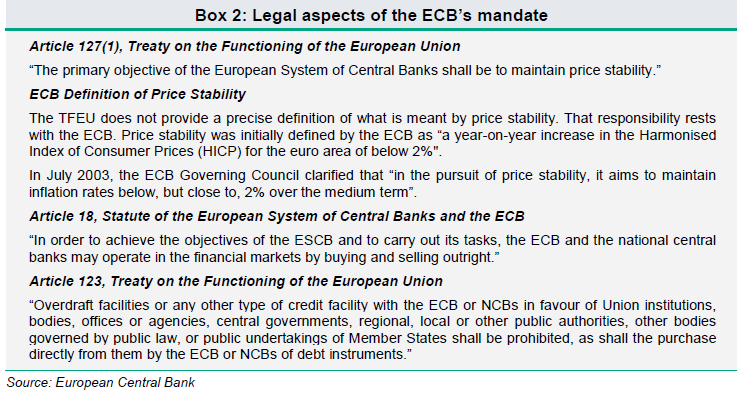 The reluctance to use large-scale asset purchases
“Central banks are generally reluctant to buy government bonds, and the issues are more complex for the ECB than for others…QE is politically sensitive and unpopular with some Governing Council members.”

“Relative to other major central banks, the ECB has been less willing to embrace the principle of balance sheet expansion and, specifically, expansion via asset purchases. The ECB has implemented three asset purchase programmes since the onset of the financial crisis. Cumulatively, the asset purchases have amounted to slightly less than EUR 300bn, equivalent to roughly 3% of euro-area GDP…In comparison, the Bank of England’s asset purchases have totalled GBP 375bn, roughly eight times the magnitude of the ECB’s purchases when measured in relation to GDP.” 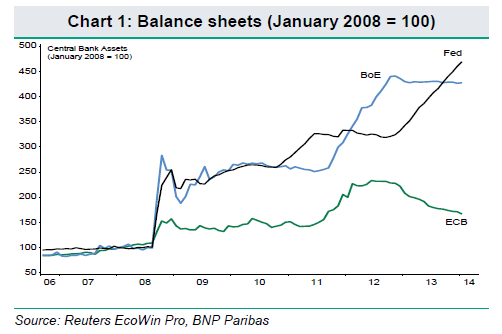 “In terms of scale, weighing up the various estimates, we would expect ECB purchases to be in the region of EUR 300-500bn, equivalent to roughly 3-5% of euro-area GDP. Were the ECB to lean towards insufficient money growth as a framework for future asset purchases, this would dovetail with its two pillar monetary policy strategy and the use of money and credit trends as a cross-check for the medium-term assessment of risks to price stability. However, which method the ECB would chose to adopt is very uncertain.”

“If we assume the ECB buys EUR 400bn (the mid-point of the range above) in sovereign debt markets with maturities of up to ten years, on the basis of capital key weights, the ECB will end up holding significant but not dominant shares of outstanding debt in most euro-area member states. But if the maturity is limited to three years, the purchases will potentially dominate some markets. This may cap how much the ECB is willing to buy”.

Which assets could the ECB buy?

“In targeting private sector assets, the ECB may get closer to the root of the problems which it is trying to address. The creation of an active ABS market in the euro area would allow banks to free up their balance sheets, facilitating new lending and effectively easing monetary policy by re-opening the credit channels through which it operates. However, there are obstacles in terms of technical complexity, pricing and the quantum of available assets.”

“One of the drawbacks of buying private-sector assets, however, is the lack of deep markets in which to buy. This would limit the scale of any such purchases which, in turn, would hinder the effectiveness of the policy as a key transmission channel…

“The available pool of private sector assets that the ECB would be able to buy will fall short of the EUR300-500bn we think likely will be the size of an initial ECB QE programme…private sector asset purchases would be a complement, not an alternative, to purchasing euro-sovereign bonds.”

“We expect the ECB’s purchases of sovereign bonds to be weighted by each country’s contribution to the ECB’s capital. Purchases of private sector assets, perhaps including supranational and agency debt, are also likely. The ECB may want to limit its initial purchases to maturities of up to 3 years, as with the OMT framework. But purchases of longer maturity assets may be preferable, or may also become necessary later…The greatest argument against limiting QE purchases to the front end of the curve may lie in issues of market liquidity. An asset purchase programme of EUR 400bn, only 4% of GDP, would still amount to some 32% of the outstanding 1-3 year euro sovereign market” “The SSA [national or supra-national agencies] market is clearly not as deep as the sovereign debt market. Still, even if we exclude non-EUR and non-benchmark issues, the market remains significant and would give the ECB a good degree of diversification.”

What markets can learn from statistical learning