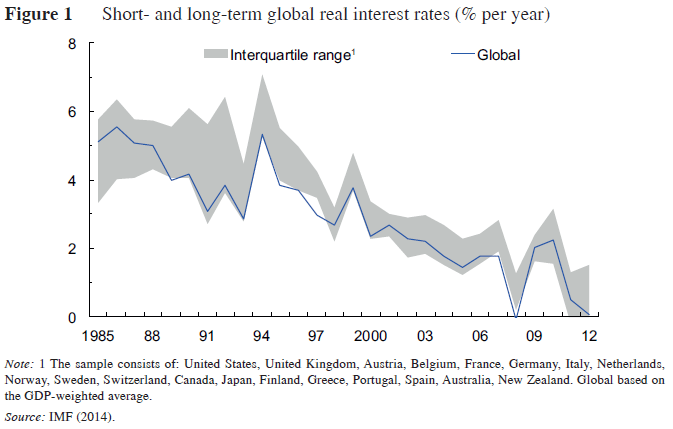 Home Financial System and Regulation The dangerous slide in global real interest rates
Share on Facebook
Tweet on Twitter
Various research contributions suggest that the global decline in real interest rates may be self-reinforcing. That is because low real rates spur leverage, debt, and resource misallocations. This gradually lowers the natural rate of interest of the economy. Yet when the natural rate falls, the policy-influenced actual real rate must fall alongside, merely to avoid a tightening of financial conditions. At the zero lower bound this can lead to distress.

The below are excerpts from the papers and articles. Emphasis and cursive text have been added.

“The debate on secular stagnation centres on the natural rate – the short-term real interest rate consistent with full employment – and on the real interest rate. While both rates are related, they have different dimensions and different drivers. The natural rate is a structural variable, driven by real economic factors…approximated by long-term potential economic growth or by the marginal product of capital. The ex-ante real interest rate – measured by the nominal rate deflated by expected inflation – is a cyclical variable, which reflects financial market conditions, inflation dynamics and monetary policy reactions.” [Hoerberichts/ van den End]

“[Various research papers] argue that low interest rates validate themselves, suggesting that the natural rate would fall as a result… There are several channels through which this causality can run…[i] low real rates stimulate an increase of debts. As a consequence, countries may end-up in a debt trap… [ii] A related channel is that low real rates and high debts create resource misallocations…[iii] Another channel through which the financial sphere affects the natural rate is… that the natural rate falls after a financial shock, represented by rising credit spreads. This causality is explained by the protracted decline of consumption as key determinant of the natural rate.” [Hoerberichts/ van den End]

“Policies that do not lean against booms but ease aggressively and persistently in busts induce a downward bias in interest rates over time and an upward bias in debt levels – something akin to a debt trap. Low real interest rates may thus be self-reinforcing and not always ‘natural’…
By influencing decisions to invest, variations in financial conditions affect the evolution of the capital stock, and hence, future economic fundamentals. An expanding capital stock during booms may help to constrain inflation and obviate the perceived need for monetary-policy tightening…
The long-lasting impact of the financial cycle becomes especially evident in the bust phase. The cumulative build-up in debt and associated resource misallocations – especially the overhang of capital – leave a legacy that takes time to resolve. And an impaired financial sector may also hold back new investment in productive sectors. Indeed, a growing body of evidence shows that output is permanently lower in the wake of a financial crisis” [Borio/ Disyatat]

“Low rates are good news for fiscal policy and for debt overhang in general. Other things equal, lower interest rates make it easier to sustain or decrease debt, and require a more limited fiscal consolidation… A reversal of the portfolio shifts favouring safe assets observed in the 2000s is unlikely. Indeed, one of the legacies of the crisis is tighter financial regulation, ranging from higher capital ratios to liquidity ratios. The Basel Committee estimates that the effect may be an additional demand for safe assets by financial institutions of about USD3 trillion.” [Blanchard/Furceri/Pescatori]

“[The figure below] shows the evolution of the world real interest rate over the last 30 years…It has two striking features. The first is the decline in the rate from a peak of about 5% in 1986 to 2% before the crisis and to approximately zero in 2012…The second is the degree to which real interest rates have increasingly moved together, as shown by the tight – indeed, increasingly tighter – interquartile range for individual country real interest rates in the figure. This suggests that one can, and actually must, think of a global interest rate, determined in a global market.” [Blanchard/Furceri/Pescatori]

“It is no coincidence that the secular decline in real interest rates has occurred against a backdrop of a sustained build-up of debt (as shown in the chart below). [Borio/ Disyatat]” 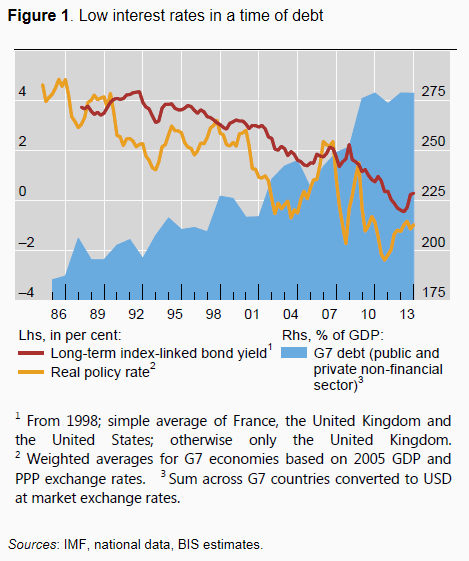 “The research question of our paper is whether there is a causal effect that runs from the real rate to the natural rate…The ex-ante real interest rate can be inferred from actual bond yields and market expectations on inflation… Our proxy for the natural rate relates to…expectations on economic growth for the next 5 to 10 years as provided by Consensus Economics.…
We first extend the benchmark model of the natural rate by including the effect of the real interest rate on potential output. Then we investigate the link between the natural rate and the real rate empirically. To account for the likelihood that both variables may influence each other, we estimate bivariate Vector Autoregression models (VAR) for Japan, Germany and the US [from 1990 to 2014].
The simulation outcomes provide evidence for a (Granger) causal link running from the real rate to the natural rate, which is statistically significant for Japan, borderline significant for Germany and not significant for the US.
This result confirms that low real rates can lead to economic stagnation, which has plagued Japan since the early 1990s. For Japan and Germany we find a (Granger) causal link running from the natural rate to the real rate, which reflects that market prices catch up with changing long-term growth prospects.” [Hoerberichts/ van den End] 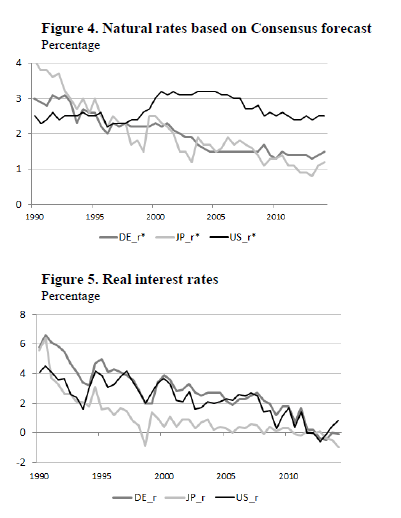 “First, expansionary monetary policy may become less effective [over time], since by reducing real rates, this policy will also affect the natural rate. This diminishes the stimulus effect on demand, which depends on the difference between natural and real rate. Second, raising the natural rate will be more effective in avoiding secular stagnation than policy aimed at reducing the real rate, for instance by lifting inflation expectations. The latter may even be counterproductive in the sense that it reduces real rates and long-term potential growth.” [Hoerberichts/ van den End]

“Conspicuously absent from the debate [of sliding natural interest rates], however, is the role of monetary and financial factors in explaining the trend decline in real rates. After all, interest rates are not determined by some invisible natural force – they are set by people. Central banks pin down the short end of the yield curve, while financial-market participants price longer-dated yields based on how they expect monetary policy to respond to future inflation and growth… Over the last three decades, several credit-induced boom-bust episodes have caused major, sustained damage to the global economy. It is difficult to square this reality with the view that interest rates, which set the price of leverage, have been on an equilibrium path all along.
More stimulus may boost output in the short run, but it can also exacerbate the problem, thus compelling even larger dosages over time. An unhealthy dependence on painkillers can be avoided, but only if we recognise the risk in time. [Borio/ Disyatat]” 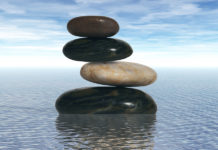 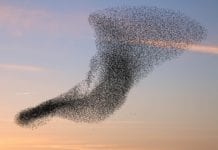 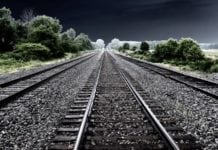 An overview of financial crisis theories

The root of China’s financial distortions