Capital regulation reform could lead to excessive bank asset encumbrance and distortions in funding markets, as unsecured institutional creditors face an increased risk of statutory bail-in. Excessive asset encumbrance could undermine a bank’s resolution in distress. Rising costs of unsecured bank debt could lower its share below what is required for loss absorption.

The below are excerpts from the report. Cursive text and emphasis has been added.

Reform and consequence for bank liabilities

“OTC derivatives reforms, and some aspects of Basel III liquidity regulation may encumber more assets, thereby increasing unsecured bondholders’ potential losses…Proposals to strengthen resolution frameworks (such as introducing depositor preference and providing bail-in powers) may increase losses for some bank creditors in an effort to protect small depositors and limit the burden on taxpayers in the event of resolution. ” 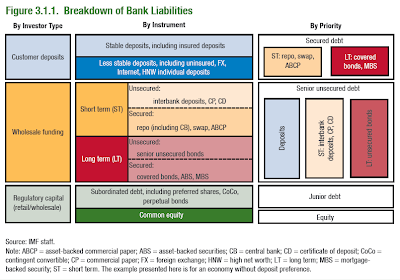 “Excessive asset encumbrance reduces bail-in debt and makes resolution less effective. When too many assets are encumbered, unsecured creditors (including the deposit guarantee scheme) will incur higher losses in order to honor secured debt contracts and collateral payments. The full extent of asset encumbrance, including central bank funding during a crisis, short-term repos, and covered bonds with overcollateralization, is hard to gauge with current reporting systems. ”

“The share of preferred deposits and liabilities exempted from being bailed in (including secured borrowing) is an important driver of the cost of unsecured (bail-in) debt, which rises disproportionally. ” 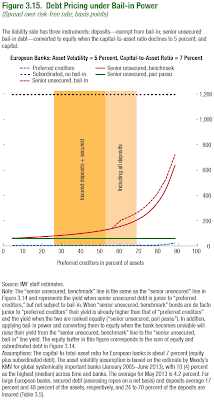 “Altogether, these elements of reform raise the cost of unsecured bail-in debt, in particular. For systemically important banks, the reforms will likely increase the overall cost of funding, particularly by reducing the too-big-to-fail subsidy enjoyed by these financial institutions. Weaker institutions may also experience a larger impact, particularly if they have inadequate amounts of capital.”

“Going forward, limits on asset encumbrance or minimum proportions of bail-in debt relative to assets may be required so that a sufficiently large proportion of unsecured debt is preserved to absorb losses when bank capital is exhausted as an important protection against future use of taxpayer funds.”

“Since the [great financial] crisis…collateralized borrowing, including covered bond issuance and central bank funding, has risen (especially in Europe). Counterparty risk has prompted the growing use of secured funding, pushing up the share of assets pledged as collateral for liabilities (termed “asset encumbrance”)… Encumbered assets are used to back up repayments owed to secured debt holders or the settlement of losses on derivatives contracts.”

“Higher asset encumbrance reduces the amount that debt holders without collateral will receive if the bank becomes insolvent, and therefore those debt holders will require higher yields to hold this debt. At the same time, other liability holders will be better protected (including those holding secured debt), and their required returns will likely be lower. ”

“Unsecured bondholders may also face larger losses if (1) a country introduces new depositor preferences for bank closures (in which case some or all retail depositors will be paid ahead of other unsecured creditors), and (2) the bondholders are bailed in when a bank is restructured (that is, they assume more of the losses than do creditors that cannot be bailed in). When the risk of losses rises (including from the fear of being bailed in), the costs of unsecured debt also rise because this class of investors will require higher returns (holding all else constant). ”

“Depositor preference gives depositors legal seniority over other senior unsecured creditors when a bank is closed, providing better protection for (small) depositors at the expense of bondholders. This preference contrasts with corporate liquidation systems in which all unsecured creditors are ranked equally (that is, pari passu), unless contracts state otherwise… A number of countries, including the European Union as a whole, are actively considering depositor preference. ” 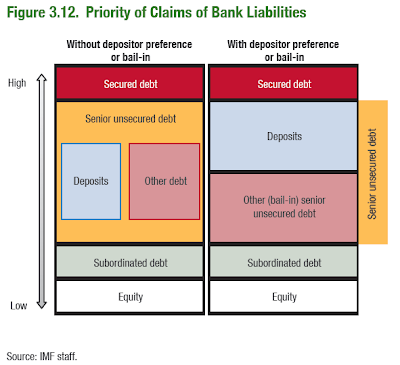 “Statutory bail-in aims to hold bank bondholders accountable for the risks they assume by removing the implicit too-big-to-fail subsidy for systemically important institutions and by imposing larger losses on them than on smaller retail creditors… Statutory bail-in grants authorities the power to write down debt or convert debt to equity when a bank is near failure so that these bailed-in debts absorb losses should capital be exhausted. These powers become available when a bank is no longer viable but before it becomes insolvent, ensuring that bank bondholders fully bear the risks they assume. ”

“For bail-in powers to effectively provide more loss-absorbing capacity, banks would need to maintain a certain amount of bail-in debt, leading to proposals for some quantitative targets. The 2012 European Commission’s proposal suggests 10 percent of total liabilities (including regulatory capital) as the target. In the United Kingdom, the Vickers report proposes loss-absorbing capacity between 7 and 10 percent of risk-weighted assets (in addition to equity amounting to 10 percent of risk-weighted assets). “

Why CDS spreads can decouple from fundamentals