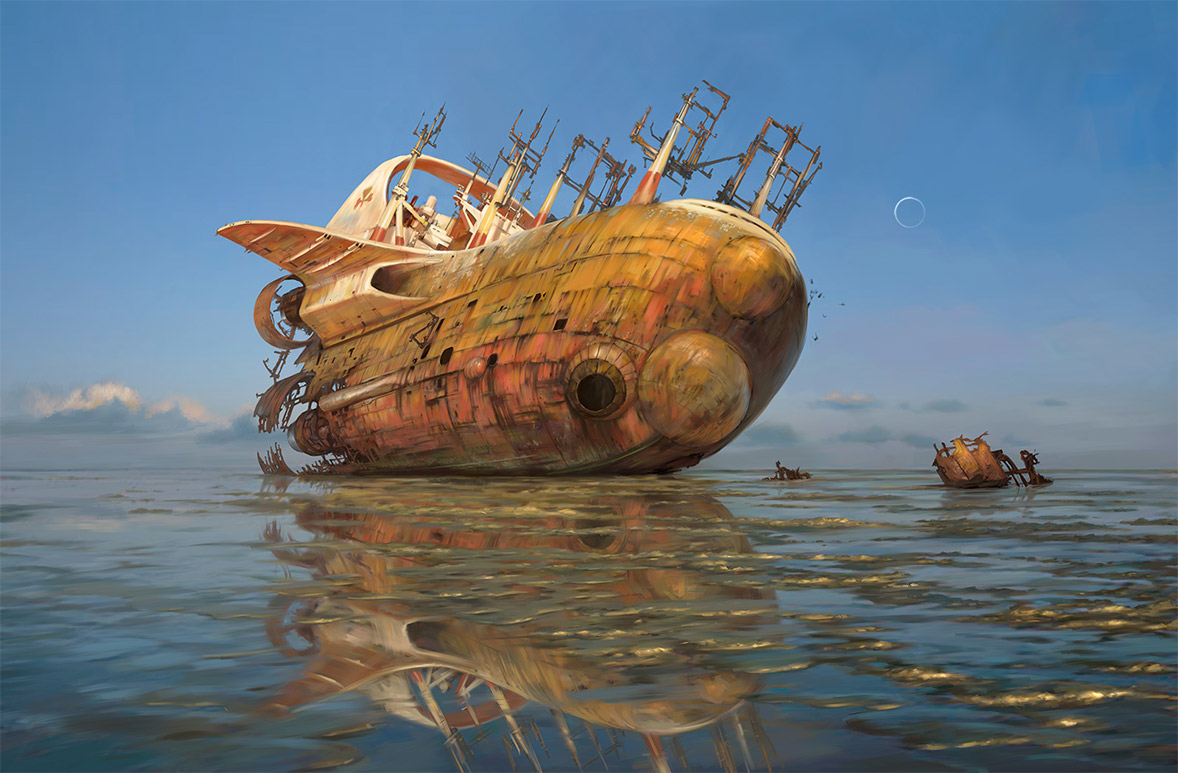 A CGFS report highlights the pressure of a ‘low for long’ interest rate environment on life insurance companies and defined-benefit pension funds. This pressure reflects a fundamental mismatch: the duration of liabilities is greater than that of assets. Hence low rates (discount factors) have reduced funding ratios below 100% after the great financial crisis. Simulations suggest that funding ratios could decline further, possibly accompanied by negative net cash flows. A ‘low-for-long’ scenario would broadly make things worse. While the nature of this risk is well known, its manifestation is gradual and partly mitigated by the asset reflation of the 2010s. The worst scenario for insurance companies and pension funds is one where rates ultimately fail to rise or are pushed even lower (negative) due to new deflationary financial market shocks.

The post ties in with SRSV’s lectures on non-conventional monetary policies, particularly its impact on systemic risk and the exhaustion effect.

“An environment characterised by ‘low-for-long’ interest rates may dampen the profitability and strength of financial firms and thus become a source of vulnerability for the financial system.”

“The balance sheets of insurance companies and pension funds are sensitive to prolonged periods of low interest rates mainly because their liabilities tend to be of longer duration than their assets, resulting in negative duration gaps. A negative duration gap implies that low discount rates boost the value of liabilities to a greater extent than the value of assets, undermining solvency (solvency channel)…Negative duration gaps arise both because these firms commit to making future payments over very long horizons and because future payments are relatively insensitive to interest rates. In general, the payouts of defined benefit pension funds do not change with interest rates…Similarly, payouts associated with guaranteed life insurance company products may not fall as much as interest rates when these fall below guaranteed minimum levels…For…assets and liabilities that include streams of receipts and payments that stretch out into the future, assessing solvency depends crucially on the discount rate used. In most cases, prudential regulation of insurance companies and pension funds use discount rates linked in some way to a market interest rate.”

“New evidence collected…on the basis of a survey…provides a sense of the magnitude of the negative duration gaps. insurance companies in the Netherlands and Sweden and pension funds in Luxembourg all had duration gaps of more than 10 years in 2016. To the extent that these positions are not hedged, a fall in interest rates by 1% would bring about a decline in the funding ratio in excess of 10%. In practice, insurance companies and pension funds are likely to hedge part of their duration gap although precise information on this is not readily available.”

“Although the adverse effects of low interest rates on the profitability and balance sheets of insurance companies and pension funds would likely play out gradually, so that problems can normally be addressed in an orderly manner, it is quite possible that some firms might not find ways to adapt and as a result experience solvency problems, with knock-on effects to other parts of the financial system.”

“The existence of surrender options on some life insurance contracts can create additional vulnerabilities…Surrender options allow policyholders to liquidate their investments early and receive the policy’s surrender value. Surrender values are typically computed by compounding paid-in premiums at a guaranteed rate of return, and adding a share of past excess investment returns (profit participation). Crucially, surrender values do not depend on current or expected future market interest rates…Exercising these options becomes more attractive if a period of low interest rates ends with a sudden snapback of rates, potentially draining insurance companies’ liquidity (liquidity channel).”

“Distress or outright failure of particular insurance companies and pension funds could be transmitted to the rest of the financial system and to the broader economy through counterparties in the financial sector and/or stakeholders in the non-financial sector. Heightened liquidity needs induced by firm distress could amplify downward corrections in valuations through fire sales.”

Scenario analysis: how bad is “low for long”?

“This report identifies and provides evidence for the channels through which a ‘low-for-long’ scenario might affect financial stability…The report assumes that this scenarios driven by weakness in economic growth and inflation; other factors could also lead to persistently low interest rates, although perhaps with different implications for financial stability.”

“The baseline scenario uses IMF projections, which are assumed to represent mainstream projections…Central banks are assumed to have achieved their inflation target by the terminal date, and thus the 2027 nominal three month rate is equal to the sum of the natural rate of interest and the inflation target. The 10-year yield is then determined as the sum of the nominal three-month rate plus a country-specific term spread…equal to the average spread between 1999 and 2016…Relative to baseline, the low-for-long scenario projects a lower path for interest rates, actual and potential GDP growth and inflation…The natural rate, the inflation rate and the nominal short rate…end up respectively 100, 50 and 150 basis points lower than baseline by 2027.” 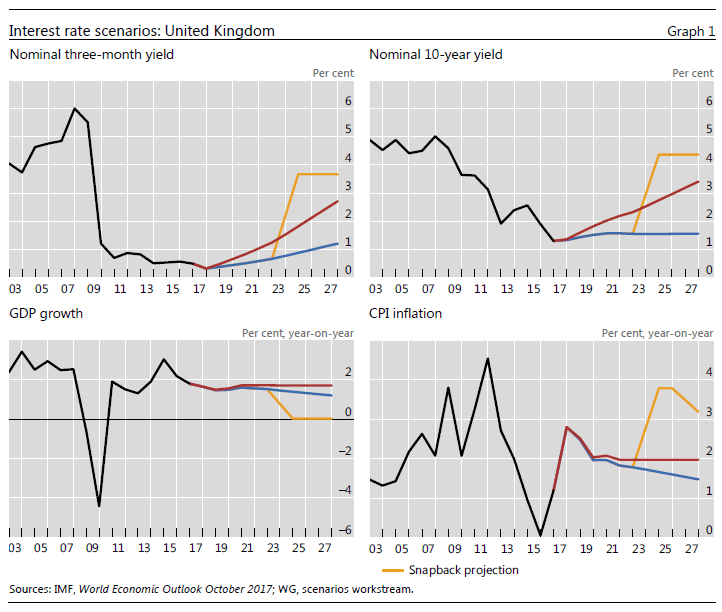 “Defined benefit schemes have consistently accounted for approximately 90% of pension funds’ assets in Canada, the Netherlands and Japan, and to a lesser extent in the United Kingdom. Guaranteed return products represent the majority of claims against life insurers. In Belgium, Germany, Japan, Spain and Switzerland, their share has consistently exceeded 80% of insurers’ assets since 2010.”

“Given the subdued rate outlook, even in the baseline scenario…the pickup in investment performance [which resulted from the rates compression] has not been large enough to assuage concerns about insurance companies and pension funds’ solvency. Evidence about pension funding ratios (albeit limited in scope to a handful of countries), which measure the present value of assets relative to liabilities, is no more benign, with funding ratios mainly below 100 in the post-crisis period.” 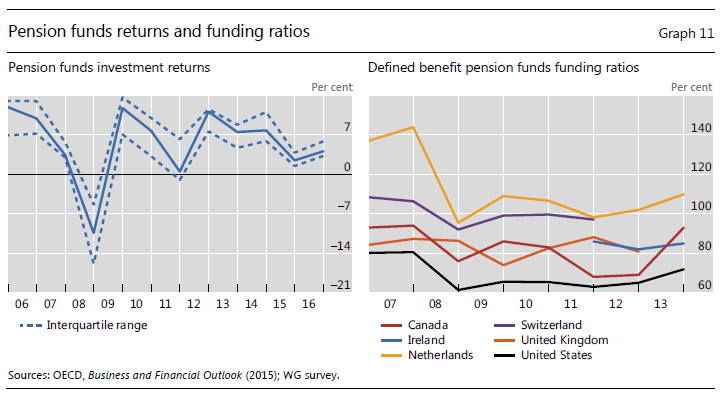 “The two solvency metrics used in the simulation analysis are net cash flows and the funding ratio.

“A simulation model of a hypothetical life insurance company confirmed that because of the negative duration gaps in insurance company and pension fund balance sheets, a low-for-long scenario would lead to depressed net cash flows and funding ratios, and thus greater risk of insolvency, relative to baseline performance.” 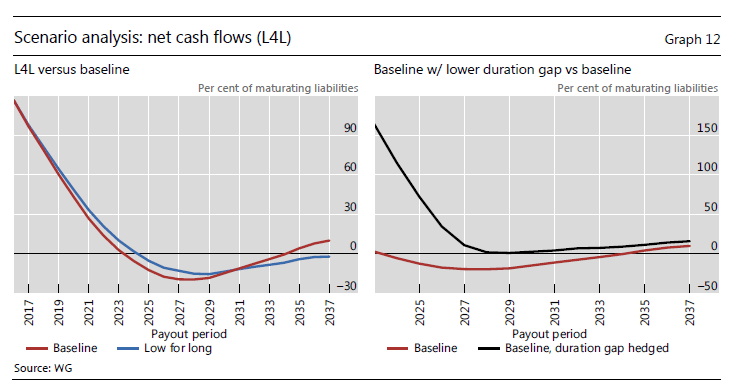 “After a small initial dip, the funding ratio recovers to its initial level by 2027, and it continues to improve on the back of rising asset values…Despite the small impact of low-for-long on net cash flows relative to baseline, the negative impact on the funding ratio is significant…It falls for longer, reaching its trough in 2027 as opposed to 2023 as in baseline, and it does not recover as quickly. The funding ratio is still below its initial value by the end of the simulation horizon.” 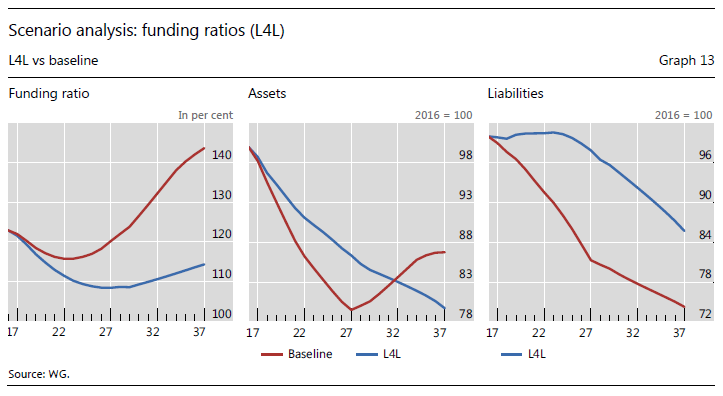 What happens if fixed income yields “snap back”?

“A period of prolonged low interest rates could well be followed by a sharp surge or ‘snapback’ in interest rates. Such a snapback could be challenging for financial institutions, even in the absence of additional risk-taking.”

“Although insurance companies and pension funds would likely see improvements in solvency ratios in the event of a snapback (because of negative duration gaps), these gains might be tempered to the extent that insurance companies and pension funds had lengthened their asset durations and taken on riskier investments during the preceding low-interest-rate period…At the same time, if a snapback were accompanied by a collapse in the valuations of risky assets, additional risk-taking in the low interest rate environment would likely cause funding ratios to deteriorate. In addition, insurance companies may experience a spike in policy surrenders (early withdrawals) and ensuing liquidity issues… Moreover, these firms could experience liquidity problems driven by losses on derivative positions – which would result in greater collateral demands – and by increased surrenders of insurance policies.” 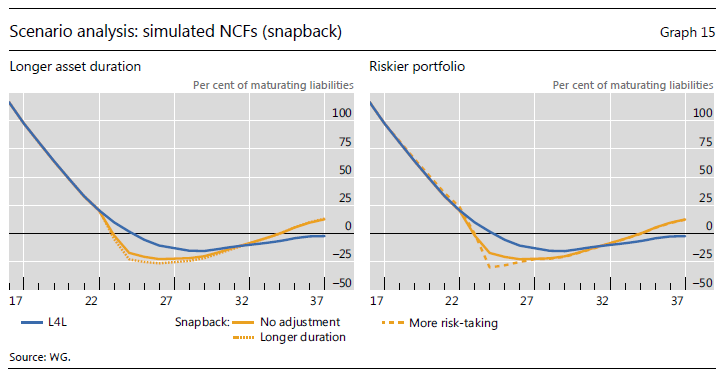 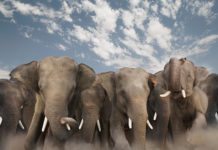 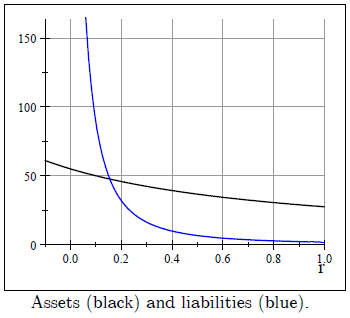 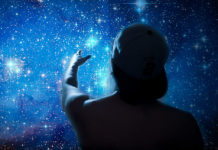 The “reach for yield” bias of institutional investors