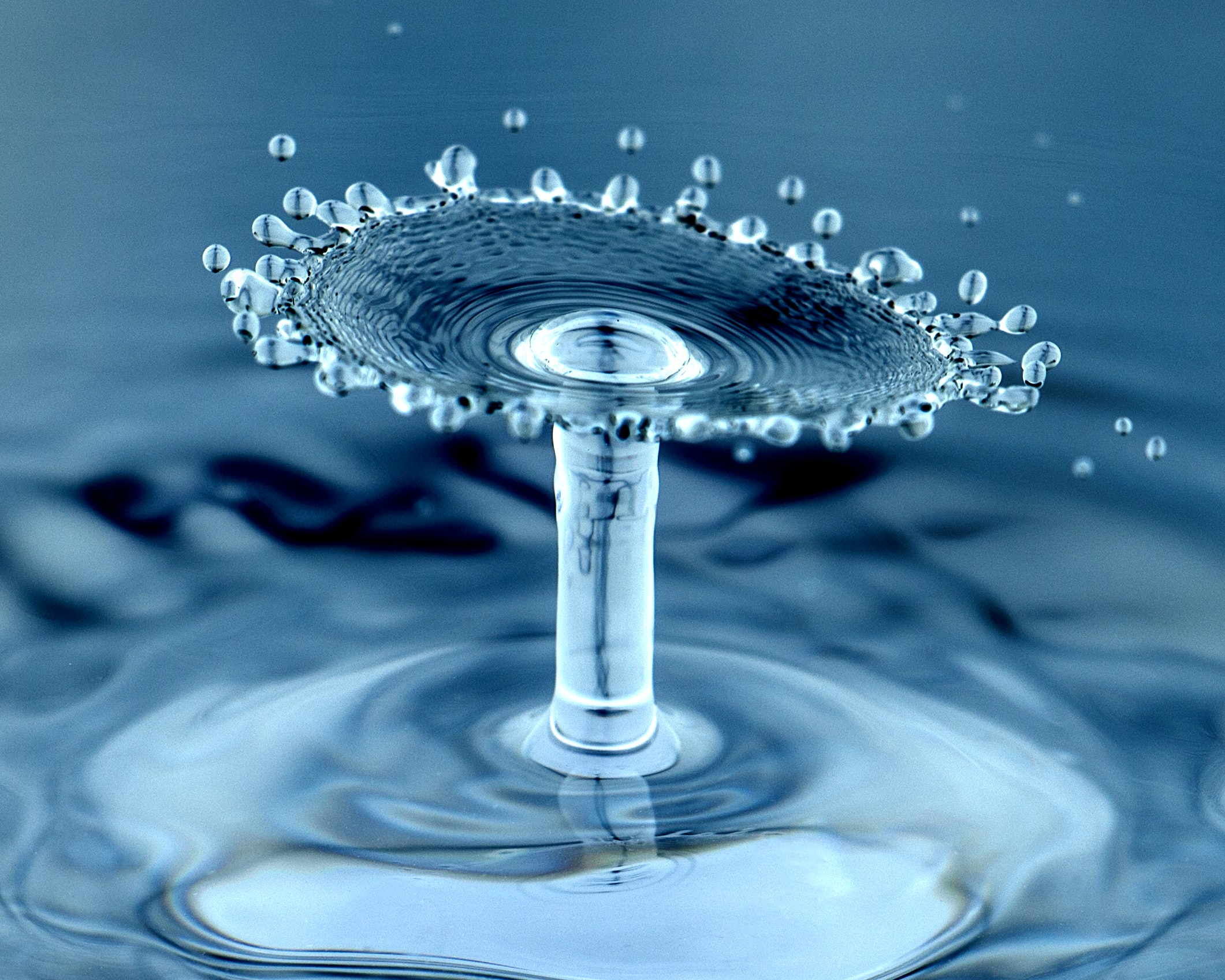 This post ties in with this site’s summary of information efficiency and macro trends.

The very basics of central bank intervention and liquidity

The size of central bank interventions has become huge over the past decades. With the rise of international capital flows and emerging markets in the 1990s central banks in smaller and developing economies have become more active in foreign exchange markets and increased their foreign exchange reserves, typically dollar- and other reserve currency-denominated fixed income assets. Global currency reserves soared from less than USD1.4 trillion in 1995 to over 12.9 trillion at the end of 2021 (chart here). Moreover, after the great financial crisis 2008-09 large-scale asset purchase programs and special open market operations in large developed countries have led to a drastic expansion of securities on central banks’ balance sheets by over USD12 trillion.

According to many economists, the expansion of the monetary base in conjunction with central bank asset purchases (unsterilized intervention) affects market prices in several ways:

All these effects suggest that an unanticipated expansion of intervention liquidity should have a positive concurrent impact on the local-currency price of domestic and foreign-currency securities. Therefore, markets track announcements and actual transactions of the central bank and usually rally when surprises are on the expansionary side.

Unfortunately, neither central bank announcements (which include hints and leaks) nor their transactions are available as a real-time data set for algorithmic trading. However, central banks do publish their balance sheets with relatively short publication lags. From balance sheet statistics one can estimate the size of recent sterilized and unsterilized interventions. While the transactions have already happened, the balance sheet data still add important and tradable information:

These types of information may not grab headlines as often as intervention announcements, but they can still guide strategic allocational decisions within an asset class towards those markets where intervention liquidity supply is reasonably expected to be stronger for some time.

Calculation and description of a quantamental dataset

Here we define intervention liquidity expansion as the change in the monetary base induced by central bank open market operations. Real-time information indicators of intervention liquidity expansion are available on the J.P. Morgan Macrosynergy Quantamental System (JPMaQS). The time series show at the end of each day the latest available officially released data of central bank activity, regardless of the actual release frequency and observation period. Thus, they represent the public information status over time. This makes the series suitable for realistic backtesting and – more generally – for the analysis of the information value of intervention data with respect to subsequent returns.

The below charts show basic characteristics of intervention liquidity since 2000 for 26 countries considered in the below analyses. Three features are noteworthy.

First, the highest average growth rates of intervention liquidity as % of GDP have been seen in countries that experienced more serious deflation risks over the sample period, such as Switzerland, Japan, the euro area, and Taiwan. 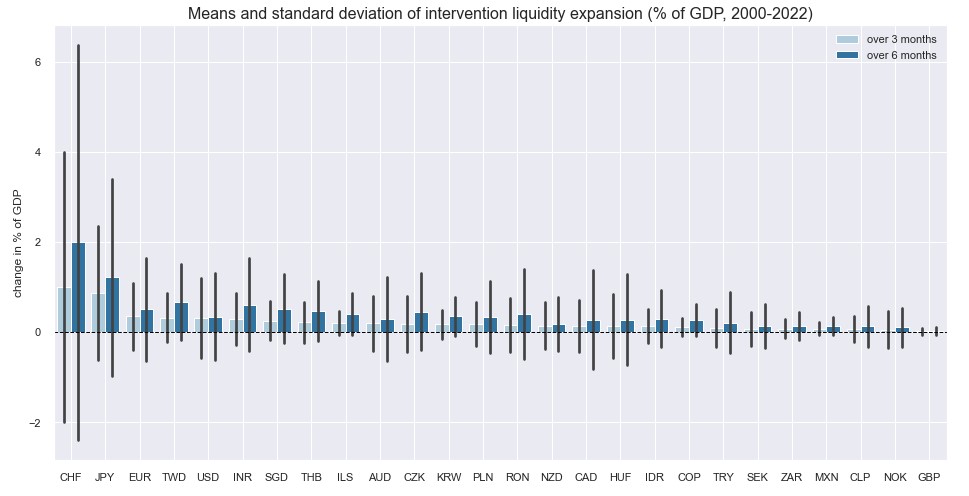 Second, intervention liquidity expansion is not a smooth process but is subject to ample spikes and large fluctuations. This plausibly reflects changes in market conditions (such as financial crises), large-scale transactions, and policy changes. 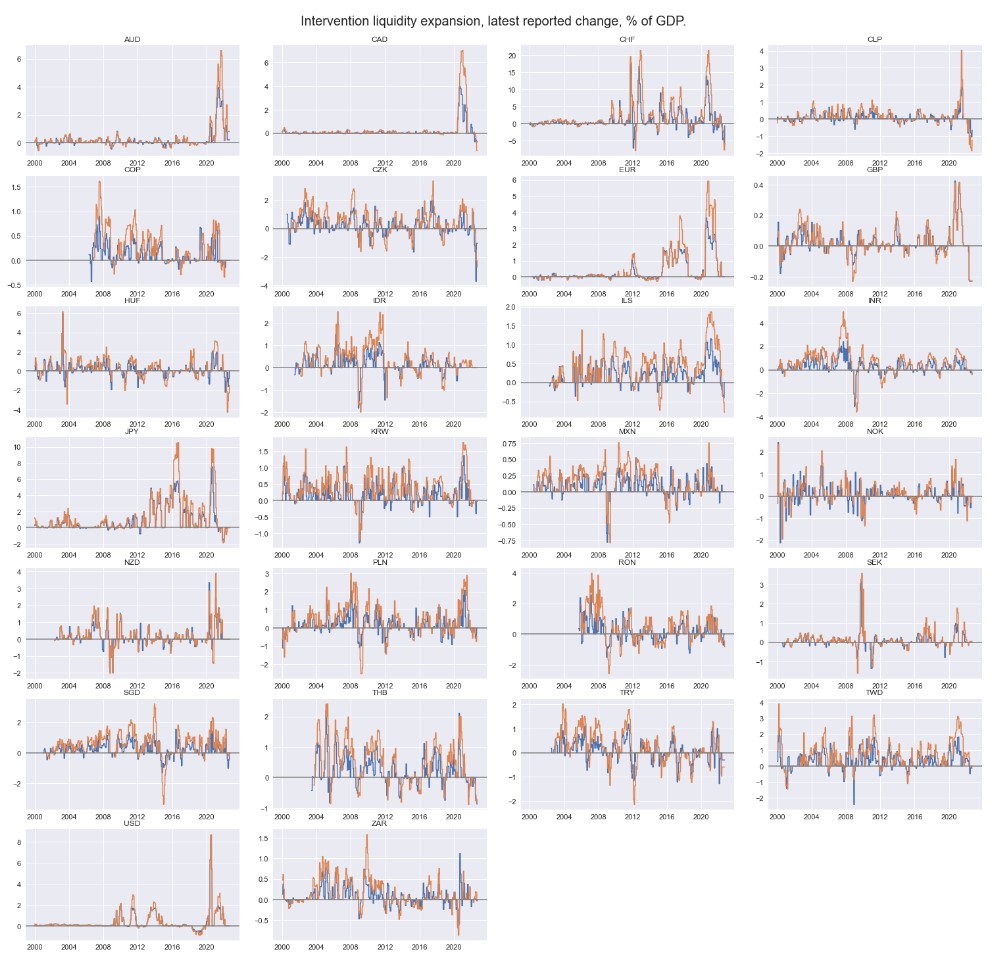 Third, many countries have displayed multi-year “seasons” of interventional liquidity expansion, plausibly in response to exchange rate management, domestic monetary policy objectives, and market support programs. This is important and means that past trends carry some information for expected future trends. Correlation between past and future 3- or 6-month trends has been highly significant with a 20-25% coefficient. 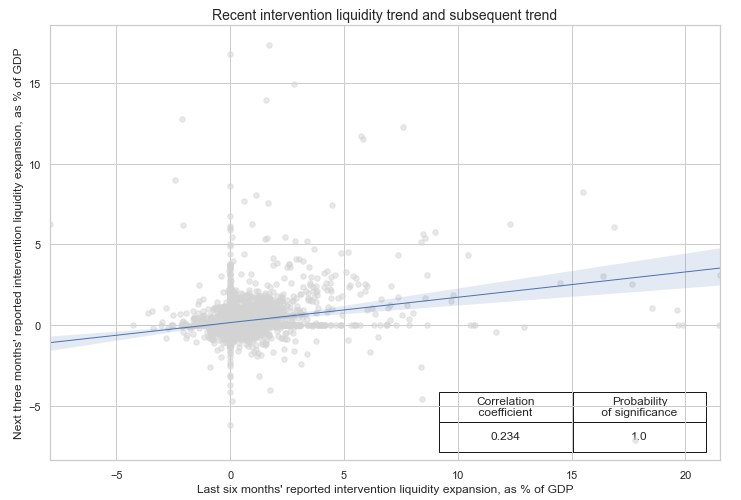 A trading signal for relative positions

The below paragraphs report basic evidence of the influence of intervention liquidity trends on subsequent macro asset returns. The focus is on the predictive power of relative liquidity trends across currency areas on the relative performance of positions across markets. Relative performance is more suitable for empirical analysis because directional market performance is dominated by global factors and for global market trends only the intervention liquidity of the largest central banks really matters. The effect of smaller central banks’ policies can only be analyzed clearly in relative market performance.

The positions looked at are equity index futures, calibrated equity-duration positions (“long-long” trades), and FX forward positions. For these positions there are clear theoretical priors as to the directional impact of unanticipated intervention liquidity expansion: equity and long-long trades stand to benefit from stronger liquidity growth, while the local currency value should weaken. By contrast, the impact of intervention liquidity expansion on longer-dated bonds or interest rate swaps is ambiguous: more market liquidity is supportive but rising inflation fears may offset the benefit.

For all analyses, we focus mainly on the relative expansion of intervention liquidity over the past report six months as % of GDP versus the average of this rate across all currency areas for which the respective contracts are traded. This means that for the relative benchmark basket of both the features (explanatory variables) and the targets (explained variables) all eligible currency areas are weighted equally.

We investigate the predictive power of intervention liquidity on country equity index returns relative to the return of a broad international basket of 16 currency areas with liquid markets. These returns are in respective local currencies. The hypothesis would be that – all other things equal – local equity prices in currency areas with faster liquidity expansion should outperform. Each country’s position has been scaled at the beginning of each month to comply with an expected 10% annualized volatility target to make vol-based position risk comparable across developed and emerging markets.

The countries or currency areas that are suitable for this analysis, i.e. provide appropriate datasets, are:

As expected by theory, over the past 20 years relative 6-month intervention liquidity expansion rates have displayed positive predictive power for subsequent monthly country equity index returns relative to a basket, with almost 99% probability of significance. 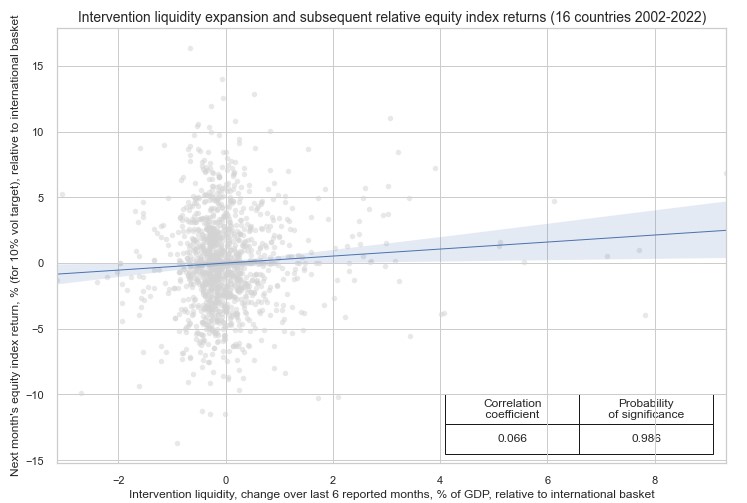 Accuracy and balanced accuracy for predicting the correct relative performance have been 50.6-50.7%, which is not huge, but valuable for a relative positioning signal with 192 implicit independent trades per year (16 countries and 12 months).

A naïve illustrative trading strategy based on intervention liquidity alone would be to take relative equity index positions in accordance with a bounded z-score of relative intervention liquidity expansion at the beginning of each month. Prior to transaction costs such a strategy would have earned an average Sharpe of 0.3-0.4 over the past 20 years and a Sortino ratio of about 0.5. This value generation is modest but did not require any optimization and has been reasonably consistent since 2007. Moreover, the naïve Pnl would have been negatively correlated with the S&P500 return. This suggests that the value of intervention liquidity-based relative allocation would be additive to a broad long international equity position. Put simply, over the past two decades intervention liquidity has served as a good principle for enhancing equity fund performance based on allocations across currency areas. 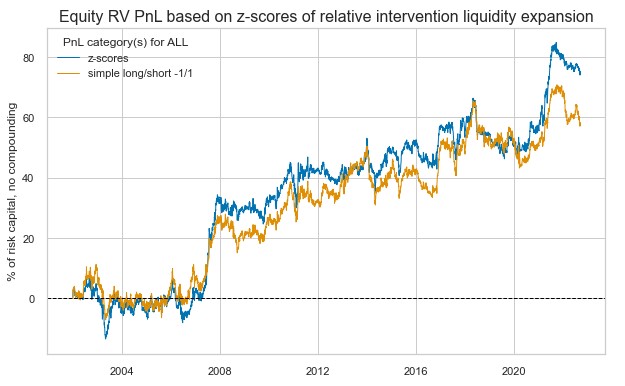 A strong relative liquidity trend should also benefit the relative performance of calibrated risk-parity equity-duration “long-long” positions. That is because local markets should broadly benefit from liquidity supply. “Long-long” positions aim to take equal volatility-based risk on equity and duration exposure, benefiting from the negative correlation between the two legs of the trade in times where real economic shocks and accommodative central bank policies dominate (view post here). Specifically, here “long-long” returns have been calculated based on 10% volatility-targeted positions in the main local equity index future and 5-year interest rate swap fixed receivers. The analysis has been conducted for the same 16 currency areas that were used for the equity analysis above.

As for relative equity positions, the correlation of relative intervention liquidity with the subsequent relative performance of “long-long” trades has been positive and significant. The probability of significance has been over 99%. The relation shows even more clearly and strongly at the quarterly frequency, suggesting the liquidity signals are persistent. 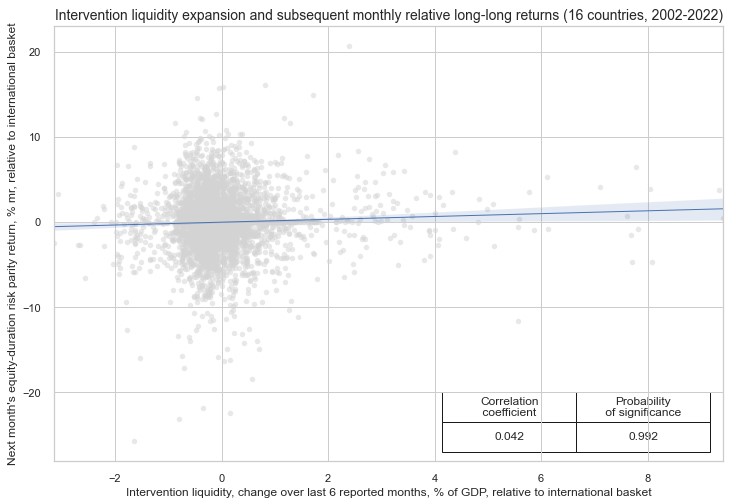 The relation shows even more clearly and strongly at the quarterly frequency, suggesting the liquidity signals are persistent over many months. 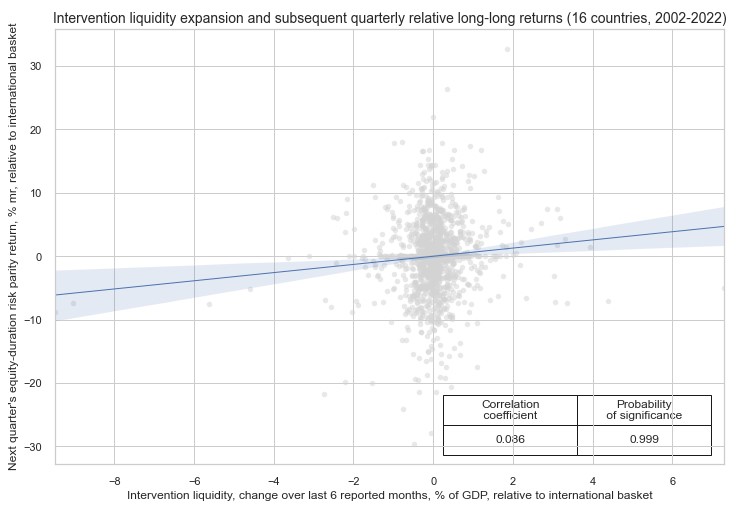 Balanced accuracy of predictions of monthly relative long-long returns has been 50.7%, almost the same as for relative equity returns. With 192 independent trades per year this is high enough for notable value generation.

The simple generic relative long-long PnL based on z-scores of relative liquidity trends would have produced a modest Sharpe ratio of 0.3 and Sortino ratio of 0.4 before transaction costs. Yet, as for the relative equity PnL, correlation with global equity benchmarks has been near zero or slightly negative, suggesting that intervention liquidity trends have been a helpful signal for “long-long” allocations across currency areas. 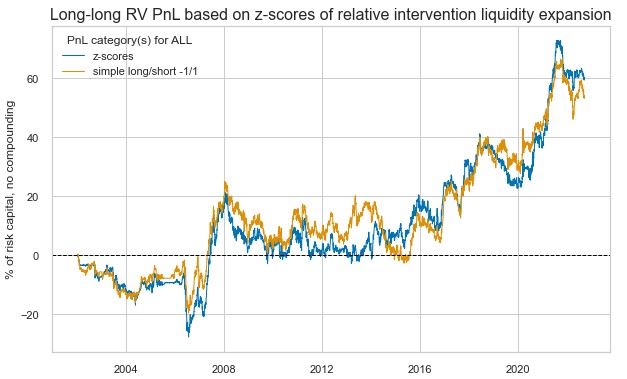 Unlike local assets, the impact of relatively strong intervention liquidity expansion on relative local currency returns should be negative. Here we [a] use monthly generic FX forward returns of the local currency of smaller countries against natural benchmarks (U.S. dollar for most and euro or euro/dollar basket for some Europeans) and [b] use these returns for 10% vol-targeted positions versus an equally-weighted basket of such positions to arrive at generic relative returns.

The analysis of intervention liquidity impact has been conducted for the following 22 currency areas with largely convertible currencies and flexible exchange rates:

As expected, the correlation between relative intervention liquidity trends and relative returns on local-currency longs has been negative, albeit smaller than for local assets, and with only 96% probability of significance. 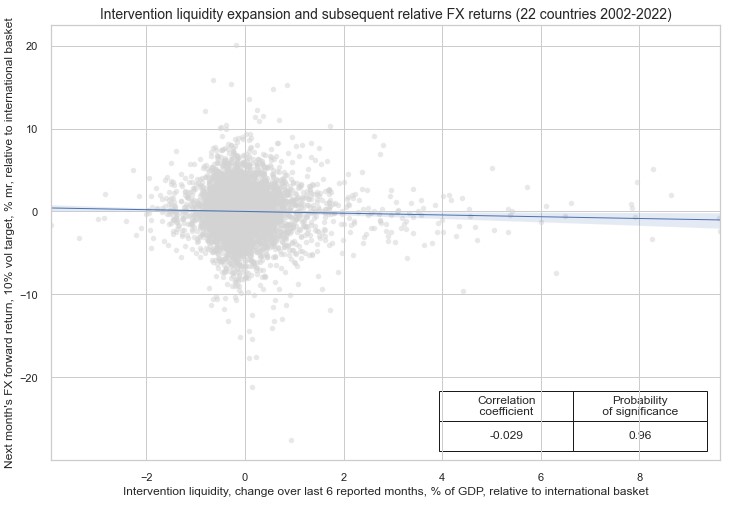 Also, accuracy measures of correct directional predictions of the relative trades have been lower at 50.2-50.5%. They would have been notably higher for shorter lookback periods, i.e. 50.7% for 3-month liquidity trends, suggesting that FX market effects may be more time-variant and short-lived.

However, even with the lower accuracy ratio, a large number of conceptually independent trades per year (264 if all currencies are liquid and convertible) has led to a higher PnL generation in FX for the past 20 years than for relative equity and long-long-trades. The average Sharpe ratio for a PnL based on simple z-score signals with monthly rebalancing has been 0.4-0.5 before transaction costs and the Sortino ratio near 0.7. Correlation with the S&P500 has been near zero. This suggests that relative intervention liquidity trends are a valid basis for an FX relative value strategy. 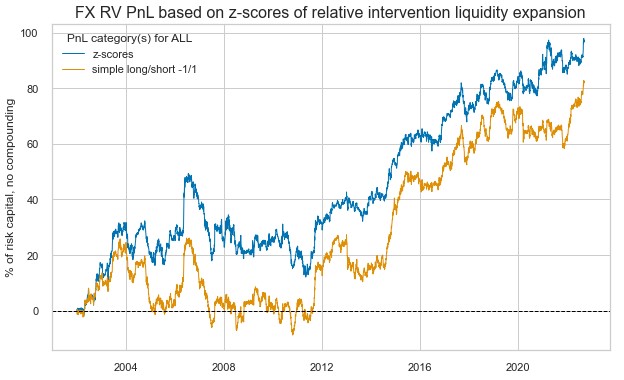 Japan’s new policies and the threat of rising yields

Term premia in the times of “lift-off”