In its October 2012 World Economic Outlook the IMF presented a 135-year study on public debt reduction strategies. It points out that debt stocks of over 100%  of GDP have not been uncommon and do not normally lead to restructuring. Indeed, in the developed world out of 26 episodes only 3 ended in default (Germany and Greece). Successful debt-reduction strategies typically use growth-enhancing and easy monetary policies.

The Good, the Bad, and the Ugly: 100 Years of Dealing with Public Debt Overhangs
IMF World Economic Outlook October 2012

“Public debt in advanced economies has climbed to its highest level since World War II. In Japan, the United States, and several European countries, it now exceeds 100% of GDP. Low growth, persistent budget deficits, and high future and contingent liabilities stemming from population-aging-related spending pressure and weak financial sectors have markedly heightened concerns about the sustainability of public finances.
The IMF reviewed a database for “advanced” economies since 1875 to study 26 identified episodes of excess debt, specifically the evolution of the debt-to- GDP ratio for 15 years after the 100% threshold was crossed. A basic line chart (see below) conveys three key insights: 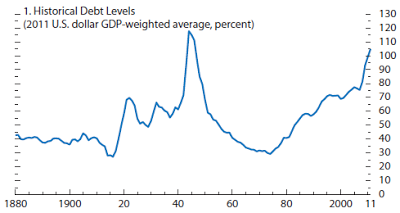 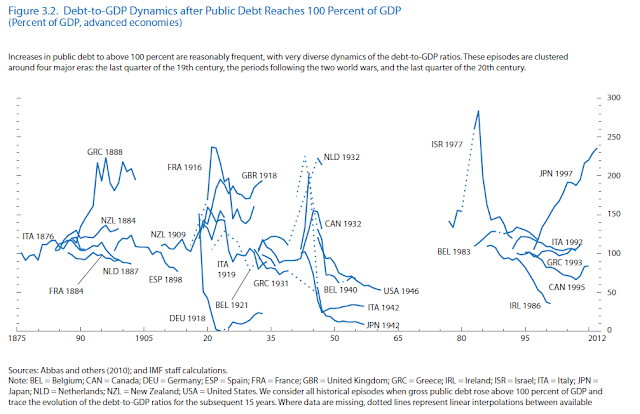 Among the 26 episodes, only 3 feature default: Germany (1918), which suspended war reparations in 1932, and Greece (1888, 1931), which defaulted in 1894 and 1932, respectively. These episodes have little relevance for the challenges faced by advanced economies today for at least two reasons. First, they involve very peculiar features that set them apart from others: the post–World War I political instability in Germany, the nation-building effort of Greece at the turn of the 19th century and the subsequent Greco-Turkish war of 1897, and a period of deep internal political instability in Greece after the 1919–22 war with Turkey. Second, in these defaults a large proportion of public debt was denominated in foreign currency (or gold), which made debt repayment subject to exchange rate fluctuations.
After reaching 100% of GDP, the debt-to-GDP ratio tends to decline, even though at a very moderate pace. This tendency to reverse is not present at lower levels of debt, for example when debt rises above 60% of GDP.
The relationship between inflation and debt reduction is…ambiguous. Although hyperinflation is clearly associated with sharp debt reduction, when hyperinflation episodes are excluded, there is no clear association between the average inflation rate and the change in debt. Finally, a relatively stronger growth performance is associated with debt reduction when hyperinflation episodes are excluded.
For countries currently struggling with high public debt burdens, the historical record offers important lessons.

Why the covered interest parity is breaking down