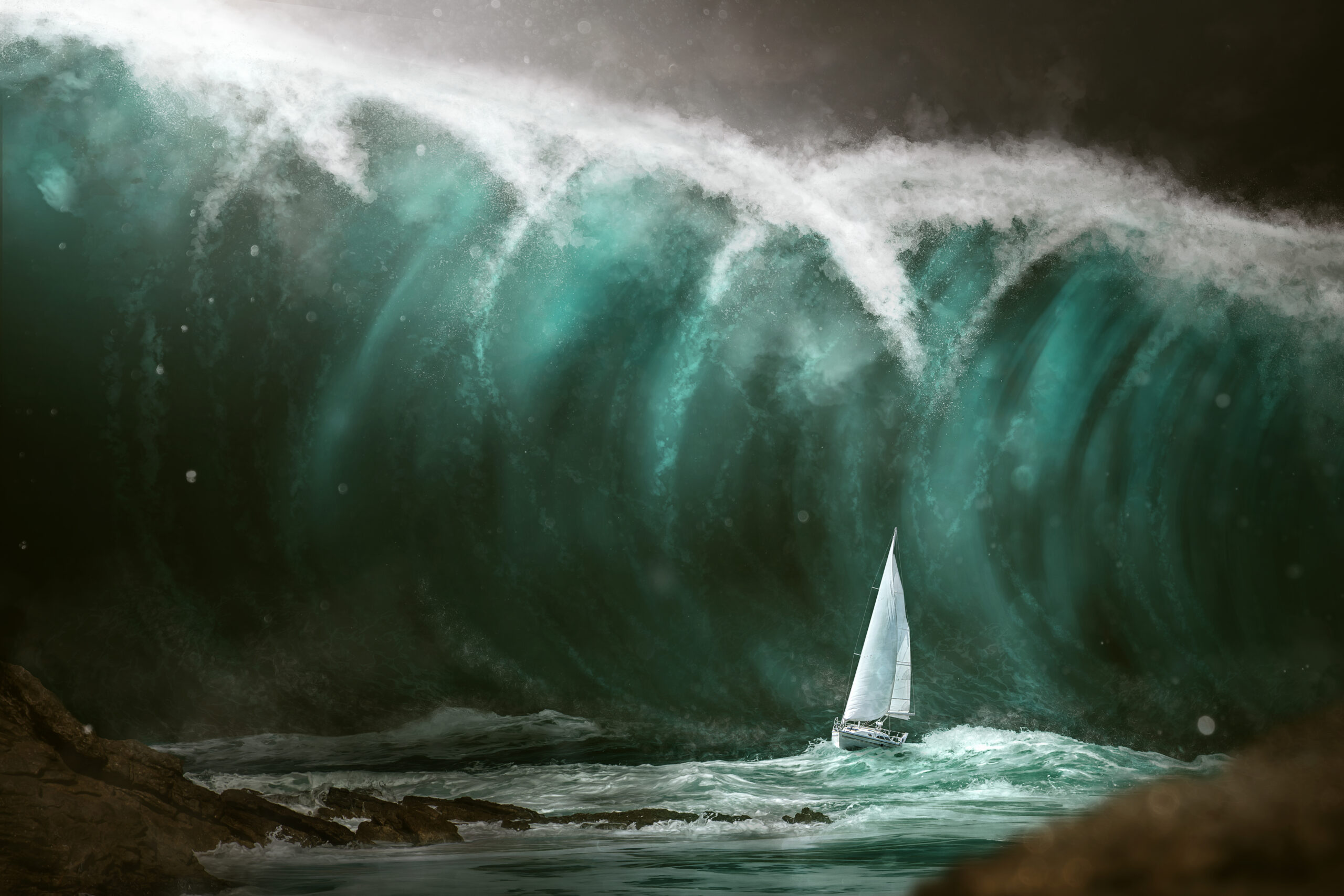 Currency areas with negative external balances are – all other things equal – more vulnerable to financing shocks. Jumps in market price volatility often indicate such shocks. Realistically it takes a few days for the market to fully price the consequences of shocks consistently across currencies. Hence, the products of external balances-based “resilience scores” and volatility shocks are plausible indicators of “post-shock currency hazards”. This means that they should serve as signals for differences in currency returns after market volatility has surged or dropped. An empirical analysis based on 28 currencies since 2000 shows that a most simple “post-shock currency hazard” measure has significantly helped predict subsequent short-term returns and would have added positive PnL to FX trading strategies, particularly in times of turbulence.

This post ties in with this site’s summary of endogenous market risks.

Currency areas with high dependence on financial flows should, all other things equal, experience more pronounced exchange rate (depreciation) pressure following shocks to the financial system. Financial shocks often trigger jumps in market price volatility. While the first wave of market shocks is typically dominated by risk reduction and position liquidations, the second wave often reflects the response of the broader economy or the anticipation of that response through efficient macro traders. Currency areas’ dependence on external balances needs to be estimated based on a range of concurrently available external balance data. Market participants do not continuously watch these.

We define vulnerability here as a currency area’s dependence on external credit and capital flows. Markets would assess such vulnerability based on concurrently available macro balance sheet data. In particular, we focus on a small set of very popular measures, which have been taken from the J.P. Morgan Macrosynergy Quantamental System (JPMaQS, overview here and more details here) in order to ensure that that they are approximately point-in-time, i.e represent the actual set of indicator values that market participants observed at the end of each trading day:

Economic theory suggests that all of these balances are related to vulnerability. In general, the view is that currency areas with higher external deficits and larger external net and gross liabilities are more dependent on capital inflows. As a rough proxy of their combined influence, we z-score (normalize) all balances with maximum score values of 3 standard deviations, to contain the influence of outliers, and then combine them by averaging. We call the combined z-scores “resilience scores”. A large positive score indicates high resilience of the currency area. A large negative score indicates high vulnerability.

The below panel shows the group-wise and aggregate resilience scores across currency areas. Normally these scores are changing just very slowly over time. However, particularly on the external balance side adjustments can sometimes be sharp and rapid, due typically to financial and terms-of-trade shocks. 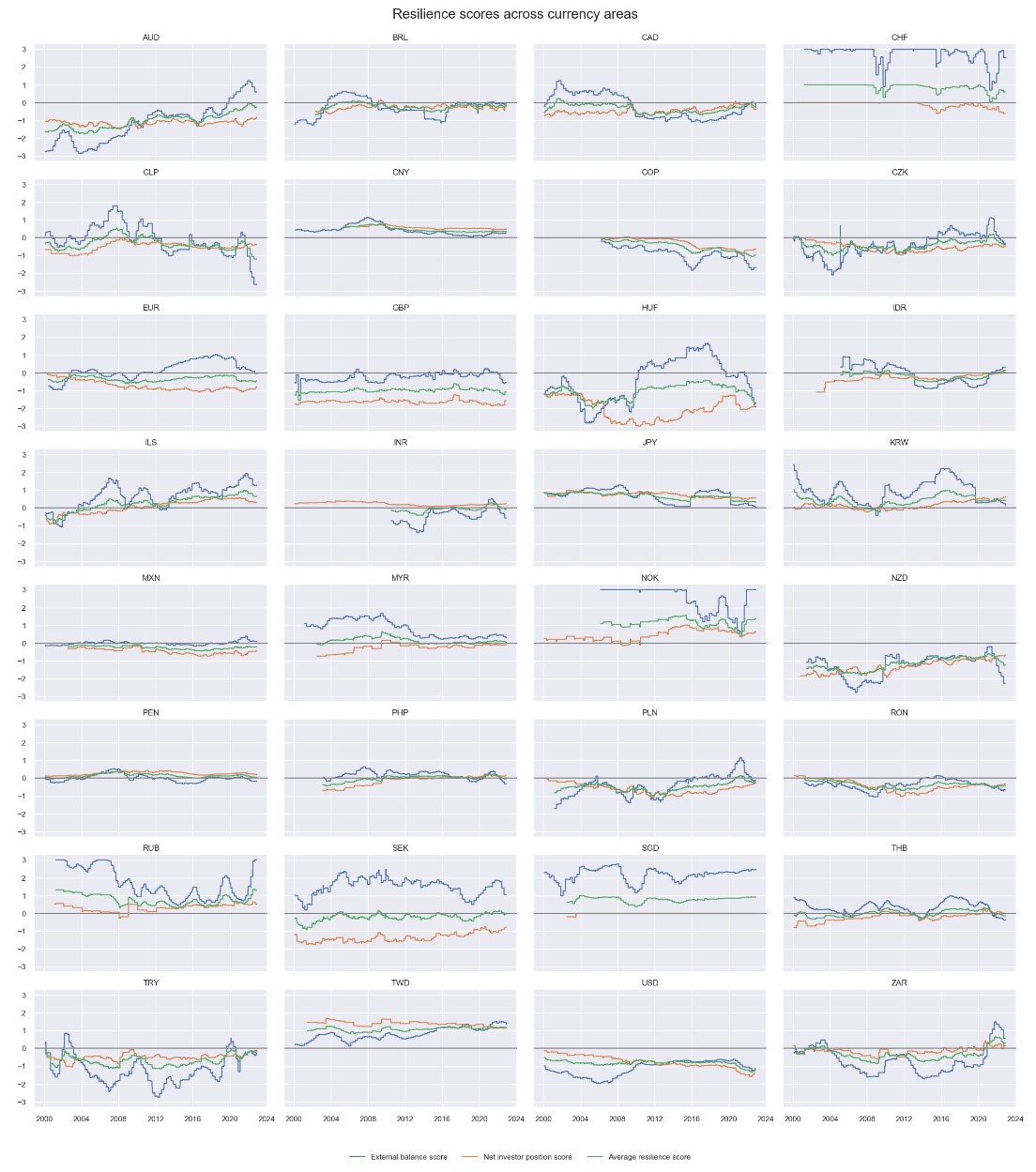 For the legend of the currency tickers please see Annex 1 at the end of the post.

Market return volatility is often related to disruptions of credit and capital flows. Indeed, volatility itself may be a cause of disruption because of its important role in risk management systems. Here we focus on realized volatility of key derivative contracts across asset classes. In all cases, we calculate annualized standard deviations of returns based on an exponential moving average of daily returns with a half-time of 11 active trading days. Then we calculate the percent change of this volatility metric at the end of each trading day versus its three-month moving average. Any change of more than 1/3 (33%) is defined as a significant “shock”. Small changes in volatility are usually not relevant for financial flows. The exact choice of lookback window and shock threshold has been based on practitioner judgment rather than optimization.

These types of volatility shocks have been calculated for the following sets of assets:

Basket volatility shocks are calculated as percent changes of basket volatility indices. They are approximately the average of percentage changes in the volatility of the constituent contracts, thus giving each contract roughly equal weight. The original volatility calculation for the individual contracts has been taken from the J.P. Morgan Macrosynergy Quantamental System.

Finally, we also calculate volatility shocks for a basket of baskets, i.e. a global cross-asset class basket that gives approximately equal weight to FX, equity, and credit. We do so in two alternative ways:

The below panel shows all imputed volatility shocks for the three asset classes and the two cross-asset baskets since 2000. Shocks have been largest (in % of previous vol levels) in credit, which is an implicitly non-linear asset class, due to the optionality of default on the part of creditors. Shocks have also been common in equity, but smaller in size. Generalized FX shocks have been the least common. Naturally, the global maximum cross-asset class shocks experience many more and larger shocks that the average shock basket (which is why the latter are hard to see in the charts).

The hypothesized exchange rate impact of a volatility shock on subsequent FX trends (currency hazard) can most simply be approximated by the volatility shock times the resilience score. We call this product post-vol shock currency hazard. Conceptual it is a measure of peril for financial flows and exchange rates that implies that currencies with a positive score will outperform subsequent to shocks and that those with a negative score will underperform.

The simplicity of this calculation serves the purpose of testing the principle, not deriving an optimal trading signal. Plausibly, better signals would optimize the thresholds of balances for the resilience of shocks, consider some other indicators, such as FX reserve ratios and credit ratings, and adjust for carry or real interest rate differentials.

The below panel shows the estimated post shows (balanced) post-shock hazards for 28 global currency areas since 2000. The red bars are based on the maximum of the vol shocks of the asset classes, while the blue bars are based on the average vol shocks across asset classes. Non-zero values are common across all currencies because the shock factor is global. Countries and periods with pronounced positive or negative resilience scores display the biggest absolute hazard values. And naturally, the maximum shock impacts are always larger (which is why they are hard to see). 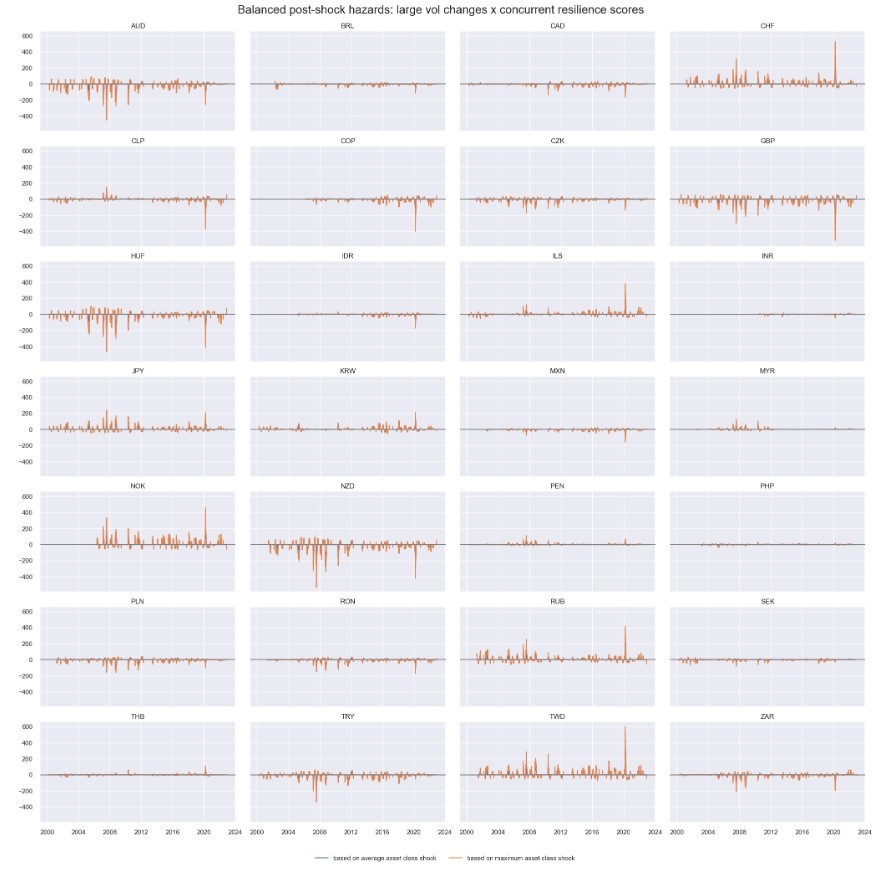 An alternative calculation is to allow for one-sided vol-shock consequences for non-USD currencies. This means that an upside vol-shock is assumed to cause funding pressure on all other currencies, just less so for currencies with external surpluses than for those with deficits. This proposition is backed by the dominant role of the dollar as funding and reserve currencies, which suggests that relative to the dollar, and maybe to some extent to the euro, all currencies suffer, albeit to varying degrees. Probably, the “best” signal is a combination of balanced and one-sided vol shock hazards. Still, here we show the two methods separately to compare and check the robustness of the basic trading strategy idea. The one-sided vol-shock hazards are implemented by simply subtracting the maximum absolute value (3) from the winsorized resilience z-scores.

We check the predictive power of post-shock hazards for subsequent FX forward returns at a weekly frequency. This means we use end-of-week hazard levels to predict the next week’s returns. In accordance with the sections above we consider four versions of post-shock hazard:

The default primary version for the below comments is the first version, but we report any significant deviations in results for other versions. All analyses are based on the panel of 28 currencies since 2000 shown in the above graphs.

For the balanced average shock hazard and for all periods that recorded non-zero volatility shocks correlation has indeed been positive and significantly so, for the whole sample and both for the 2000-2010 and 2011-2022 subperiods. 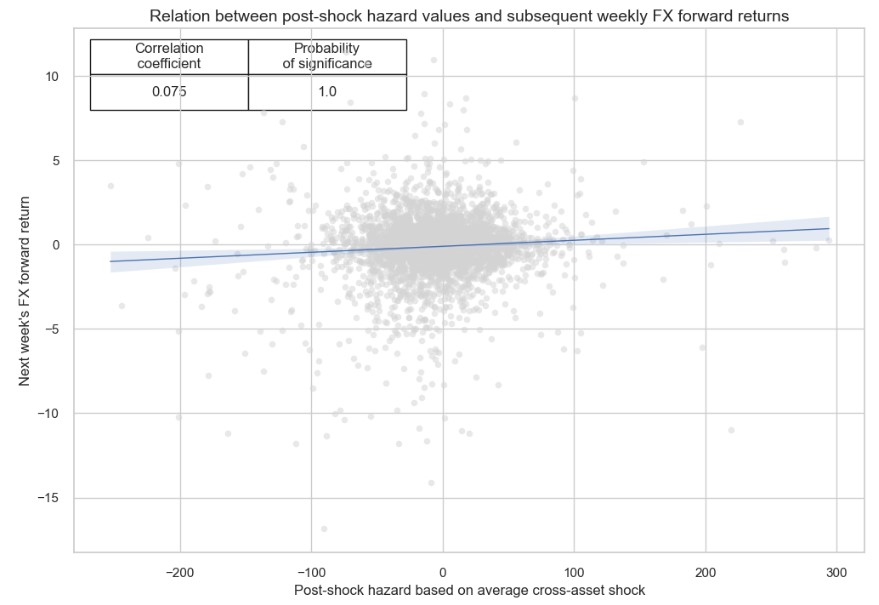 Weekly accuracy, i.e. the ratio of correctly predicted weekly returns since 2000 has been 51.6% for the balanced average post-shock hazard and the panel. Across the various measures, accuracy has been 50-53%, which is respectable for a signal that has a short bias with respect to carry and EM currencies. Even daily accuracy has been between 50.3% and 52%.

A naïve PnL that simply takes FX forward positions in proportion to the post-shock hazard on a weekly basis would have produced Sharpe ratios between 0.32 and 0.55, with infrequent trading and rare positioning. That means that most of the time the strategy would have no risk and it could be considered a complement to other strategies that work better in times of volatility. Naturally, PnL generation would have been seasonal and focused on crisis periods, such as the great financial crisis, the euro area sovereign credit crisis, and the COVID sell-off. 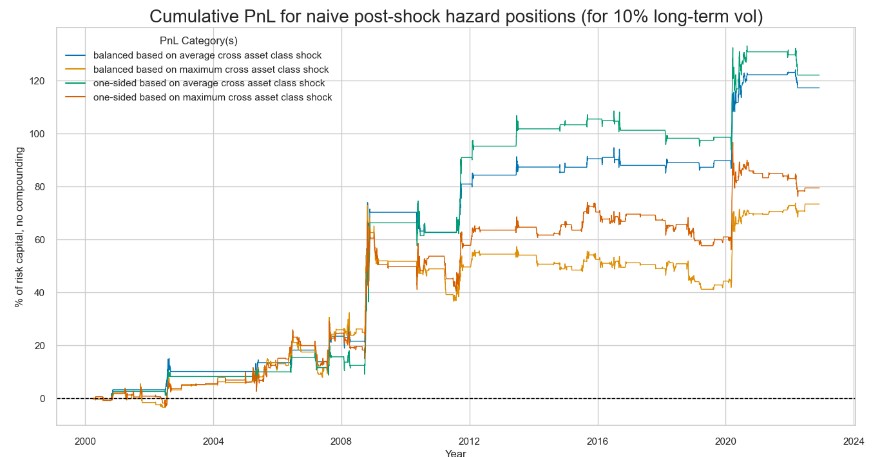 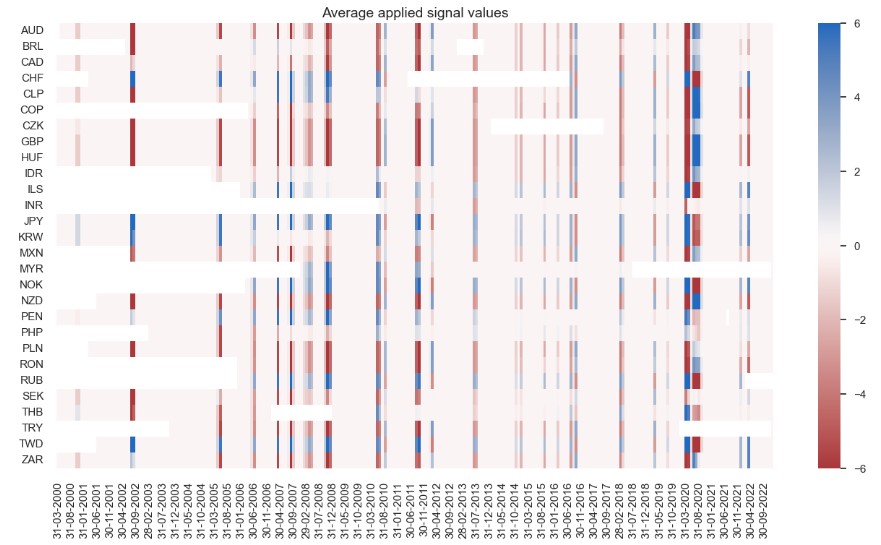 The above strategy is most simple by design and evidently flawed. One apparent issue is that it takes positions that are market directional at times of high market volatility, while the signal logically only indicates the under- or outperformance of a currency. The accidental directional market exposure cannot be justified by the rationale for the signal.

Thus, it may be prudent to mitigate directional exposure by hedging exposure to broad directional risk. For this purpose, we estimate the betas of individual FX forward positions with respect to a global directional risk basket. For details see Annex 2 below.

Correlations of post-shock hazard signals with subsequent FX returns are similar to the case of unhedged returns. However, weekly accuracy would have increased to 52.4% for the balanced average post-shock hazard and to a range of 51-54% for the other variants. This increase probably reflects that hedged FX positions in EM and carry currencies pay less of a risk premium and that, hence, the short bias of the hazard signal is less “costly”.

Value generation according to a naïve PnL simulation has been a little higher and more consistent with hedging. Naïve Sharpe ratios have been between 0.33 and 0.62. Depending on position size this improvement may not be enough to justify the trading costs of the hedge. However, the simulation illustrates the information value of post-shock hazards for the idiosyncratic post-shock performance of currencies. 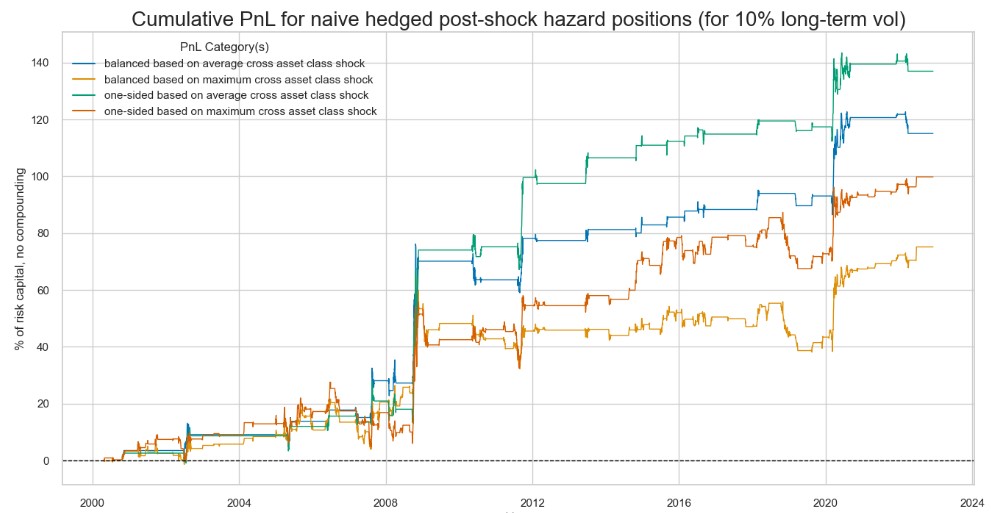 The basket is a volatility-weighted composite of the three global asset class baskets. The global equity index future basket is a fixed-weighted composite of Standard and Poor’s 500 Composite (40%), EURO STOXX 50 (25%), Nikkei 225 Stock Average (10%) FTSE 100 (10%), and Hang Seng China Enterprises (15%). The global credit index is an inversely volatility-weighted basket of CDX and iTraxx investment-grade and high-yield indices for the U.S. and the euro area. The global currency basket focuses on small, emerging market and commodity currencies (excluding pegs) and is an inverse volatility-weighted composite of 1-month forward shorts in USD or EUR against AUD, INR, KRW, NOK, NZD, PLN, RUB, SEK, TRY, ZAR. Hedge ratios are calculated based on historical “beta”, i.e. OLS regression coefficients of past forward returns with respect to global directional risk basket returns. 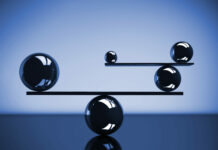 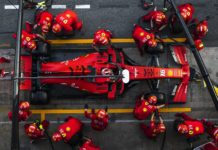