U.S. weekly jobless claims are a key early indicator for the U.S. economy and global financial markets. A new Kansas City Fed paper suggests that to use these data efficiently one should first estimate a time varying benchmark for the “neutral level” of claims. Claims above (below) the benchmark would indicate deterioration (improvement) of the U.S. labor market.

Revisiting the Use of Initial Jobless Claims as a Labor Market Indicator
John Carter Braxton, Federal Reserve Bank of Kansas City, May 3, 2013
http://www.kansascityfed.org/publicat/reswkpap/pdf/rwp13-03.pdf

“Initial jobless claims measures the number of individuals who have been laid off either temporarily or permanently and have filed for unemployment insurance benefits in the previous week. By its construction, initial claims capture one of the primary margins of the labor market: layoffs. Since firms generally conduct layoffs when their business prospects worsen, initial claims are considered a leading indicator of labor market conditions.”

“Frequently 400 thousand initial claims in a week is cited as a labor market threshold. A downside to using a fixed threshold number is that it cannot incorporate changes in labor market dynamics. To account for these changing dynamics the presented threshold incorporates multiple margins of the labor market, such as layoffs, hires, quits, and labor force participation. Considering these margins allows the presented threshold to explain more than twice the amount of volatility in the unemployment rate compared to simply using 400 thousand as a threshold.”

“Since layoffs are captured through initial jobless claims and are a component of separations, initial claims and the change in employment are negatively correlated.” 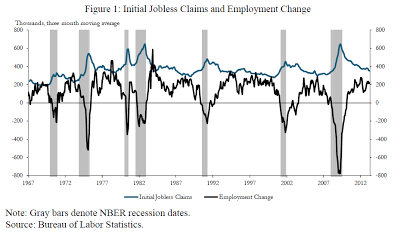 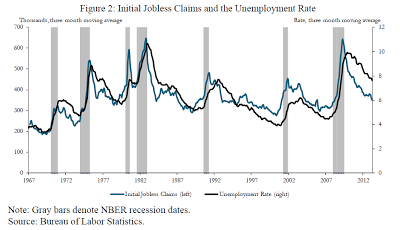 “Further…the fraction of laid-off individuals who apply for unemployment benefits varies over time… They show that the take-up rate is counter-cyclical and explain that laid-off individuals expect to be unemployed longer when the labor market is weaker, making them more likely to apply for unemployment benefits…The threshold of initial jobless claims moves counter cyclically… The countercyclical nature of the threshold indicates that in a weaker labor market an unchanging unemployment rate can occur despite an elevated level of initial claims.” 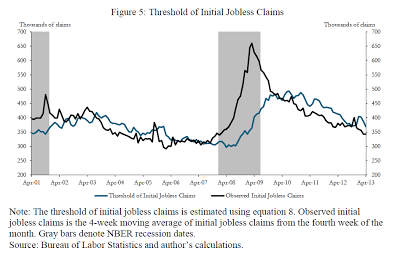 “Analyzing the difference between observed initial jobless claims and the threshold provides an estimate of future changes in the unemployment rate. [The figure below]shows that there is a strong linear relationship between the size of the deviation in month t and the change in that month’s unemployment rate.” 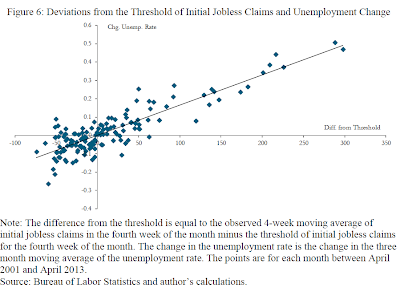 The ECB’s quantitative and qualititative easing