A very interesting Banca d’Italia study shows how euro area break-up expectations are becoming self-reinforcing, i.e. precipitating a divergence of sovereign yields and financial conditions beyond what is consistent with sovereign credit fundamentals.

“Studies on the most recent period – i.e. since the onset of the Greek sovereign debt crisis at the end of 2009 – generally find that the surge in sovereign spreads experienced in several euro-area countries cannot be fully explained by changes in macroeconomic fundamentals. For Italian government bonds, most estimates of the 10-year spread fall around 200 basis points, as opposed to a market value of almost 450 points (at end-August 2012). Furthermore, large differences between the market spreads and those warranted by fundamentals are also found on shorter maturities.

Several reasons suggest that euro-area sovereign spreads are increasingly affected by investors’ concerns of a break-up of the Economic and Monetary Union. 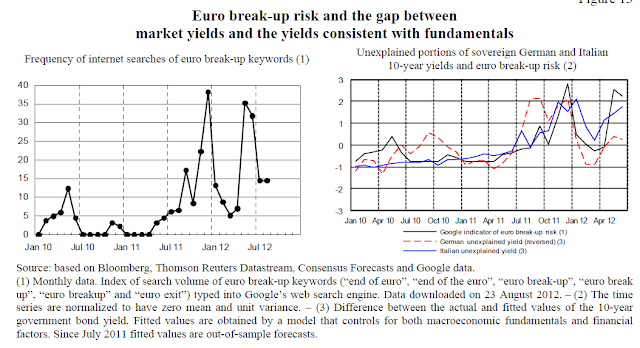 Until April 2010 the difference between the Eonia swap rate and the German government bond-CDS spread (blue line in left-hand chart below) was in fact very low… It increased considerably and since August 2011 it has consistently remained way above the maximum level reached during the global financial crisis of 2007-9. This indicator signals that, over recent months, safe haven effects on 10-year German yields might have been as large as 130 basis points….For Italy and Spain, the Eonia-sovereign spread differential…has declined considerably (even becoming negative recently), because government bond yields have increased much more than the premia on sovereign CDSs.”

Japan’s new policies and the threat of rising yields